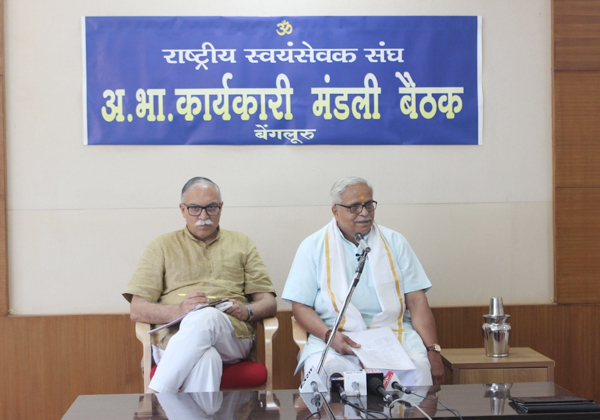 Akhil Bharatiya Karyakari Mandal of the RSS wholeheartedly welcomes the extension of the Constitution of Bharat as a whole to the State of Jammu and Kashmir followed by the decision to make Article 370 ineffective through the Constitutional orders by the Honourable President and approval of the same by both the houses of the Parliament. The decision to reorganise the state into two Union Territories, namely Jammu-Kashmir and Ladakh, is also a commendable step. ABKM congratulates the Union Government and all the political parties who supported this bold and historic decision and displayed a sense of maturity in the national interest. The statesmanship and political will showed by the Honourable Prime Minister, and his team is also praiseworthy.

Though all the provisions of the Constitution of Bharat were expected to be equally applicable to all the regions of the nation, due to the immediate and exceptional circumstances of aggression from the Pakistan side soon after partition, the temporary provision of Article 370 was added to the Constitution. Later on under the garb of Article 370, a large number of articles of the Constitution of Bharat were either excluded or extended in amended form for the state of J&K. The provisions like Article 35A were inserted arbitrarily through Presidential Orders sowing the seeds of separatism. Due to these constitutional anomalies, Scheduled Castes, Scheduled Tribes, OBC’s, Gorkhas, Women, sanitation workers, refugees from West-Pakistan etc. were facing blatant discrimination in the state. Jammu and Ladakh regions were deprived of proportional representation in the state assembly, allocation of resources and a say in the decision-making process. Due to all such wrong policies what we had seen in the state was growing ‘radicalisation and terrorism’ and complete neglect of the national forces.

ABKM firmly believes that the recent decisions and their implementation would nullify the abovementioned Constitutional and political anomalies. It also believes that this is in accordance with the Concept of Bharat “One nation- One People“, while it has also fulfilled the desire of the Constitution makers expressed in the Preamble ‘We the People…….’ .

The ABKM also believes that the reorganisation of the state has opened up new vistas for the social and economic development of all sections of the society living in all the three regions.  The reorganisation of the state has addressed the long-time aspirations of the people of the Ladakh region, paving the way for its comprehensive development. The ABKM hopes that the expectations of the refugees and displaced persons would also be addressed soon. The process of secured and dignified rehabilitation of the displaced Hindu community from the Kashmir valley should be initiated at the earliest.

It is a historical fact that Maharaja Hari Singh has completed the process of integration of the state with Bharat by signing the ‘Instrument of Accession’. To eradicate the problems arised due to misuse of Article 370, Satyagrahis of the Praja Parishad Andolan and the nationalist forces from rest of the country, under the leadership of Dr Syama Prasad Mookerjee and Pandit Prem Nath Dogra, fought for the national integration, Constitution and the dignity of National flag. In all these seventy years, nationalist forces from the state along with the rest of the country continued this struggle against separatism and terrorism, and many of them laid down their lives.  Thousands of personnel from the Army and security forces have shown their bravery and commitment to defend the national unity and sovereignty and even made supreme sacrifice. The ABKM pays tributes to all of them with gratitude.

The ABKM calls upon the countrymen to rise above political differences for establishing the supremacy and spirit of the Constitution and reaffirm national unity and integrity by wholeheartedly contributing to the journey of progress of Jammu-Kashmir and Ladakh. The ABKM also calls upon the Government to clear all apprehensions among the citizens of the area and fulfill their aspirations through effective and just governance and economic development.