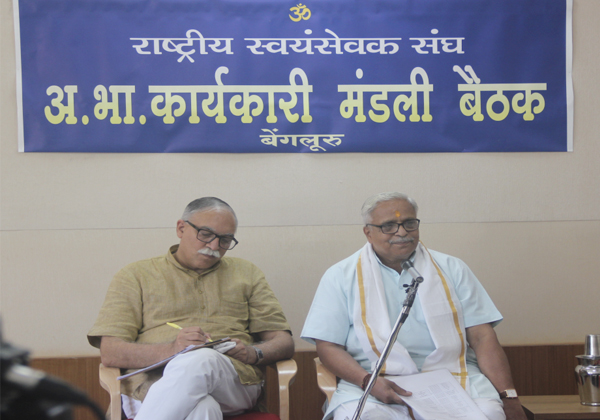 The learned advocates, who have presented all the evidences and arguments in favour of RamJanmasthan in a scholarly manner with dedication and commitment, deserve great acclaim. It is a matter of joy that no section of the society has taken the verdict as a sign of its victory or defeat instead, accepted it as the victory of the nation, justice and the Constitution.  The ABKM congratulates all the citizens of the nation for their mature response to the verdict.

“The struggle for Sri Ram Janmasthan Mandir” is unique amongst the greatest and protracted struggles in world history. Lakhs of Ram Bhakts have sacrificed their lives in the course of this continuous struggle since 1528. At times, this struggle was inspired by some great men and at other times, it was spontaneous. The legal battle that had begun in 1950, and the mass movement that began in 1983, continued till their successful conclusion. This greatest movement in the world history has reached the pinnacle of success through the tireless and dedicated efforts of a host of great men. The ABKM deems that it is its pious duty to pay tributes with gratitude to all those known and unknown martyrs on this occasion.

After pronouncement of the verdict, it was really a daunting task for any Government to win over the trust of all sections of the society and mentally prepare them to accept it with goodwill. The ABKM heartily congratulates the Central government and the present political leadership for winning the trust of all sections with patience and fortitude.

In accordance with the direction of the Supreme Court and the sentiments of Rambhakts, the constitution of a new trust namely, ‘Sri Ram Janmabhumi Teerth Kshetra’ as a society-driven trust instead of making it government controlled one and confining the role of the government to that of a facilitator reflects the farsightedness of the government. The decision to proceed with the construction of Mandir under the very leadership and guidance of the revered great saints, who had spearheaded the movement, is laudable. The ABKM fervently hopes that the Nyas will speedily complete the task of building this grand and divine Mandir and parisar kshetra at the Ram Janmsthan. ABKM also believes that all the Bharatiyas and Rambhakt brethren from across the world will participate in this sacred cause.

It is certain that, along with the process of completion of the sacred mandir, the dignity, social harmony, the sense of integrity and the urge to emulate the noble ideals of life of Maryada Purushottam  Ram will grow in the society and Bharat will fulfil its mission of establishing peace, goodwill and harmony in the world.