An Interactive Session with Farooq Khan on National Security

A seminar on National Security was conducted on April 1st 2019 at Holiday Inn, The first session was taken by Farooq Khan, Administrator of the Indian Union Territory of Lakshadweep.

Farooq Khan is a former IPS and Inspector General of Police in Jammu and Kashmir and led to the clearing of the Hazratbal Shrine in March 1996 in which 18 militants were killed. Khan has been also the mind behind creation of Task Force wing of JKP. Farooq was the head of the Sher-e-Kashmir Police Academy, Udhampur. It was under Khan that Raghunath Temple, Jammu was freed from militants in 2003. He has been also awarded with the President’s medals for gallantry, bravery and distinguished service.

National security is the requirement to maintain the survival of the state through the use of economic power, diplomacy, power projection and political power. Initially focusing on military might, it now encompasses a broad range of facets, all of which impinge on the non military or economic security of the nation and the values espoused by the national society.

Accordingly, in order to possess national security, a nation needs to possess economic security, energy security, environmental security, etc. Security threats involve not only conventional foes such as other nation-states but also non-state actors such as violent non-state actors, narcotic cartels, multinational corporations and non-governmental organisations; some authorities include natural disasters and events causing severe environmental damage in this category.

The second session was taken by Dr. Prabhakaran Paleri, former Director General Of Indian Coast Guard. He was a Strategist, an Academician, Author,Speaker and Researcher on National Security matters and corporate governance. 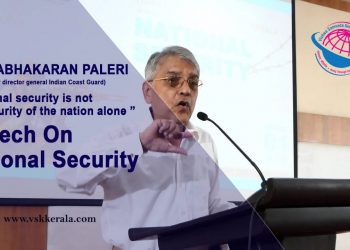