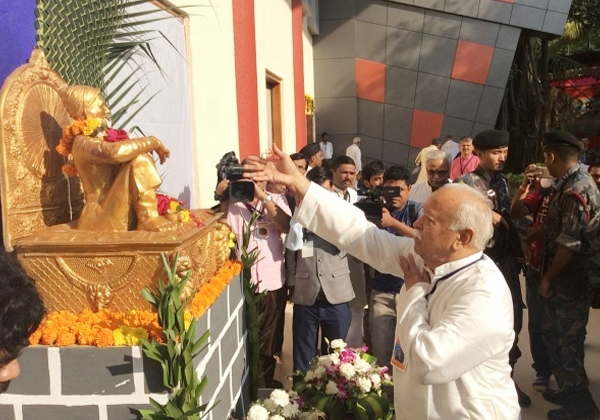 Mumbai, October 31,2018: The Rashtriya Swayamsevak Sangh has decided to focus on environment protection and water conservation in near future. Also, it has mulled an idea to train its swayamsevaks in handling the natural calamities.

The Sangh’s Akhil Bharatiya Karyakari Mandal meeting began at Keshav Srushti at Uttan near Mumbai today. Sarsanghchalak Dr. Mohan Bhagwat and Sarkaryawah Suresh ‘Bhaiyaji ‘Joshi garlanded the images of Chhatrapati Shivaji Maharaj and Bharat Mata at the beginning of the meeting. RSS Sah Sarkaryawah Manmohan Vaidya briefed the reporters at a nearby complex Rambhau Mhalgi Prabodhini after the meeting started. He informed that the Sangh organises two meeting every year, one in March and another before Diwali. The office bearers at Prant, kshetra as well as National level participate in the meeting.

The meeting has been organised in Mumbai as a part of the regular exercise. It is attended by 350 delegates from across the country and it will go on till November 2.  Vaidya said that a range of contemporary issues of national importance will be discussed at the meeting. Also, there will be discussion on the Sangh’s work done in last year and the work to be done in coming year as well as some new projects to be undertaken by the Sangh. Vaidya said that the Sangh has undertaken several initiatives since 2010 to expand its horizon.

Today, there are around 55,000 shakhas from Ladakh to Andaman and Tripura. Sangh work is spread across 850 districts and 6,000 talukas . Sangh shakhas are running regularly at 90 percent blocks. In Sangh structure, 10 to 12 villages fall under one mandal. There are such 56,000 mandals in which we have grouped all these villages. Sangh has its presence in 58 percent of these mandals so far. In last three years, there is 5 percent increase in our work in number of mandals and 3 percent in the shakhas. In all, around 31,000 villages have shakhas. Out of total shakhas 82 percent are in rural areas whereas 18 percent are in urban areas.

Vaidya said that Sangh has mulled an idea to train swayamsevaks to tackle natural calamities. The syamsevaks dedicatedly work in the natural calamities but they are not trained for it. In this meeting, there will discussion on how to train them to tackle the calamities. At present, Sangh is running 1.5 lakh social projects. “We are conducting survey of the swayamsevaks across the country to know their inclination towards social work. We will also discuss how to connect them to several projects as per their inclination.”

He said that Sangh has started an activity for protection of Indian cows, cow oriented farming and health care on the basis of cow products. Brazil and New Zealand have already recognised its values. “We have started an extensive work in this regard after 2010. 1500 new Gow Shallas have been set up by now. There are experiments going on cow urine and dung at the various cow research institutes.” There will be special discussion on water conservation and environment protection initiatives to be taken by Swayamsevaks along with Society at large. Vaidya informed that rural development activities are going on since 1998. Their effect is visible in 600 villages. We have launched a similar kind of work in other 2000 villages based on the results of these 600 villages.

Sangh has undertaken an important work in the form of an activity called as Kutumb Prabodhan. The families are being scattered now-a-days. The Sangh is concerned on how to keep the families together. While addressing a question on Ram temple , Vaidya said that this is neither an issue of Hindu-Muslim nor Temple – Mosque . When Babar’s General had intruded there was not a situation that he could not get land for offering namaz. There was ample of land. He could have constructed mosque there. He had demolished the temple. Excavations by the Archeological Department have already proved that there was a temple at that particular site. According to Islamic intellectuals even Prayer(Namaj) at forcefully occupied other’s land is not accepted and even Supreme Court in its judgement has accepted that Mosque is not necessary for offering namaz.

Ram temple is an issue of national self respect and honour. Just as reconstruction of Somnath temple done by Sardar Vallabhbhai Patel and Then-President Dr. Rajenra Prasad had attended the pran pratishtha ceremony at Somnath temple, Similarly, the government should acquire the land and hand it over for construction of Ram temple. The government should enact a law for this. Akhil Bharatiya Prachar Pramukh Arun Kumar and Sah Prachar Pramukh Narendra Thakur too were present at the briefing. 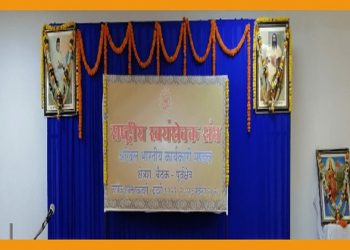 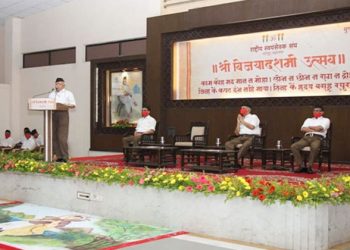 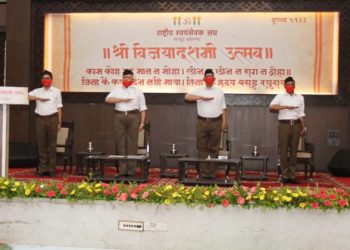