Abhayagramam, nurtured by Sugathkumari since 1985 has become a refuge, for the destitute, the mentally ill, the drug addicts and children in distress and women who have lost the security of own homes. 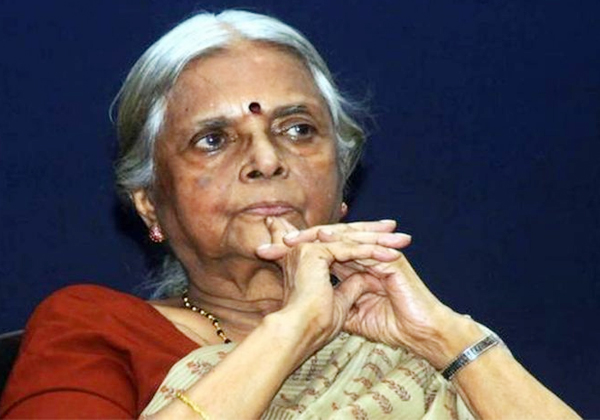 The mortal remains of eminent Malayalam poet Sugathakumari was consigned to flames at Saanthi Kavadam here at 4 pm on Wednesday.

A conservationist and women’s activist, Sugathakumari passed away earlier today. She was 86.

She breathed her last at the Thiruvananthapuram Medical College Hospital where she was admitted after contracting COVID-19. She was on ventilator support for the past few days.

She earned her place in the minds of people by taking up causes one after the other, with her poems and her activism.

While the poet in her spoke about the concerns of nature and weaker sections, the activist in her took major initiatives to address these issues, and more importantly be an icon for the future generation to take the causes.

Abhayagramam, nurtured by Sugathkumari since 1985 has become a refuge, for the destitute, the mentally ill, the drug addicts and children in distress and women who have lost the security of own homes.

Abhaya was born out of a deep concern for the helpless mental patients of the Government Mental Hospitals of the state. But it took several initiatives led by the poet to gain attention of the public and authorities to gain the attention on the pitiable condition of the mental hospitals.

She was also made the Chairperson of the Kerala State Women’s Commission in 2001.

Her concern for nature took her to fight to preserve the bio-hot spot of Silent Valley which was under the threat of a power generation project.

She travelled to the Attapady tribal belt in Palakkad to campaign against marijuana cultivators and to stand guard to numerous trees that faced axe from the civic authorities.

She took up the initiatives when the nature conservation was not in vogue and attempts by greens were viewed with suspicion over stalling development works. But her efforts paid off in a big way as the people started appreciating the value of nature.

She was born to poet and freedom fighter Bodheswaran and V. K. Karthiyayini, a Sanskrit scholar, at Aranmula in 1934. Her husband K. Velayudhan Nair, an educationist and writer, died in 2003. The couple has a daughter named Lekshmi. Her elder sister and writer B Hridayakumari, died in 2014.

In 2006, she was honoured with Padma Shri, the country’s fourth highest civilian honour.

Sugathakumari has received the Bhattia Award for Social Science, the Sacred Soul International Award, the Lakshmi Award for social service and the first Indira Priyadarshini Vriksha Mitra Award from the Government of India for her efforts in environmental conservation and afforestation.