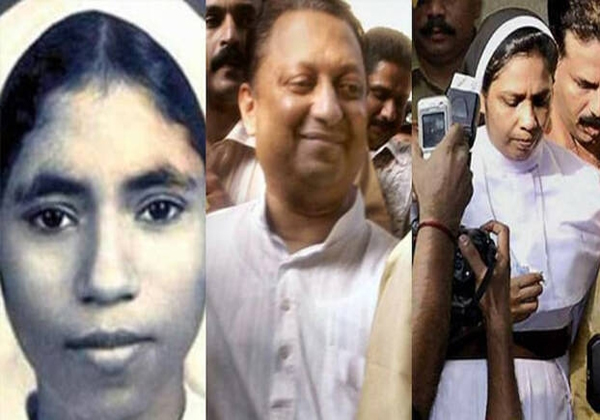 Putting an end to a 28-year-old murder case, a special CBI court in Kerala found Father Thomas Kottoor and Sister Sephy of the Catholic Church guilty of murdering Sister Abhaya. There were multiple attempts made from the top level to sabotage the case enquiry but ultimately the justice has been served. Special CBI Judge K Sanal Kumar, who handed down the guilty verdict, will hear the convicts on the sentence tomorrow. As per the CBI reports, Sister Abhaya was murdered after she saw the convicted priest and nun in compromising position.

On March 27, 1992, Sister Abhaya was found dead in the well of Pious Tenth Convent at Kottayam. Initially, the local police had reached a conclusion that Abhaya’s death was a case of suicide. Displeased with the investigation, CBI was handed over the case in 1993. But all their three reports were inconclusive and later Kerala HC transferred the case to the Kochi unit of CBI in 2008 November. On 17th November, Father Thomas Kottoor, Sister Sephy and Father Jose Poothrikkayil were arrested by the CBI.

Special CBI Judge K Sanal Kumar, who handed down the guilty verdict, will hear the convicts on the sentence tomorrow. But the Court had rejected the discharge pleas of Kottoor and Sephy observing that there were sufficient grounds for prima facie presuming that the two had committed offences punishable under Indian Penal Code sections 302 (murder) and 201 (destroying evidence) read with section 34 (Acts done by several persons in furtherance of common intention).

This conviction has further exposed the sex scandals and sexual anarchy prevailing in the Church. More details and the finding of the court shall be known to the public only when the full copy of the judgment is released.