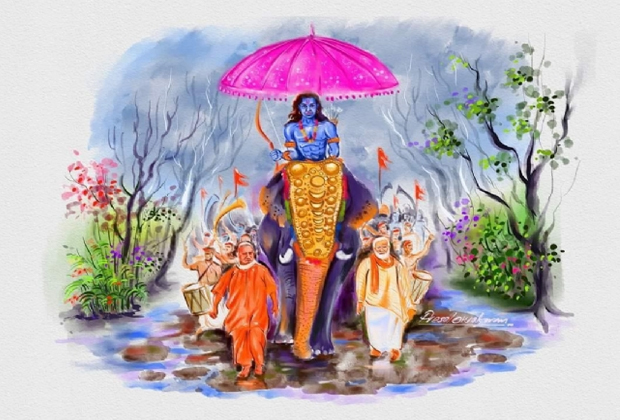 When liberals, who are not aware of the extent of Sri Ram’s popularity in the southern regions of the country, have been spreading blatant lies that Sri Ram ‘remains confined to north India’. However, a series of historical evidence prove that it is yet another ‘liberal canard’ bereft of any rationale or historical validity. In addition to hundreds of ancient Sri Ram temples which reflect the popularity of Sri Ram cult in the southern part of India, various epigraphic evidence show that both Sri Ram and Ramayana were deeply connected to the erstwhile south Indian kingdoms as well as the people of the region.

A 9th-century inscription found during the renovation of the Kurumathur Vishnu temple in Kurumathur, near Areekode in Malappuram, in 2011 shows that first Chera King, Rama Rajashekhara of Mahodhayapuram, linked the ancestry of the Perumals to Bhagwan Sri Ram.

Composed in shardula-vikridita metre in Sanskrit, the three-stanza inscription states that the king Rajasekhara belonged to the illustrious Ikshvaku dynasty of god Rama. It wishes that king Rajasekhara’s glory be spread across the oceans. Further, he is extolled as having ruled the country with justice and never deviated from the Laws of Manu. During his righteous rule twelve Brahmins constructed a temple pond and also installed an idol of god Vishnu in the temple.

The inscription was excavated during a renovation of Kurumathoor Vishnu temple in February, 2011. The discovery of the inscription was reported by Epigraphist M R Raghava Varier. Shri. Varier said the epigraph provided the first objective and direct proof to establish the date and rule of the first Perumal of Mahodayapura (Kodungallur).

The inscription, engraved on a granite slab in the Pallava Grantha script, is in the form of eulogy or “prasasthi,” praising and legitimising the rule of King Rama Rajasekhara of Mahodayapura. This also validates the inferences made by historian M.G.S. Narayanan about the name of the first Chera king. Professor Narayanan, after referring various supplementary records, had inferred that King Rajasekhara’s first name was Rama.

According to Dr Varier, “This inscription has proved to be the earliest document of Chera Perumal. It demands some revision in the existing chronology of the formative period of Kerala history.”

The Chera dynasty was one of the oldest dynasties in the early history of the present-day states of Kerala and Tamil Nadu in southern India. Together with the Cholas of Uraiyur and the Pandyas of Madurai, the early Cheras were known as one of the three major powers (muventar) of ancient Tamilakam (a macro region in south India) in the early centuries of the Common Era.

Even though the Cholas were the worshippers of Bhagwan Shiva, there were numerous Chola inscriptions contained references to Sri Ram. “Though the Chola kings were worshippers of Shiva, many of them assumed titles referring to the Rama incarnation of Vishnu. Aditya Chola (871-907) took the title of Kodandarama (the bow-yielding Rama). His son, Parantaka (907-955), assumed the title of Sangrama-Raghava (Rama in battle). His eldest son, Rajaditya, also took the title of Kodandarama like his grandfather,” writes eminent historian Meenakshi Jain in her book ‘Ram and Ayodhya’.