The petitioner has sought President’s Rule because law and order in the state have deteriorated since the post-poll violence started on May 2. 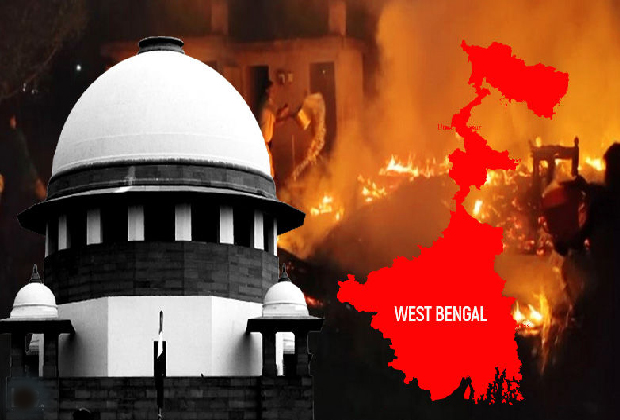 Admitting a plea seeking President’s Rule in West Bengal because, law and order have deteriorated since the post-poll violence started on May 2, the Supreme Court on Thursday (July 1) issued notices to the Union government, West Bengal government, and the Election Commission of India. Since the election commission announced the election results on May 2, over 30 BJP members and RSS volunteers have lost their lives in the post-poll violence unleashed by the TMC cadre.

The petitioners also sought the deployment of central security forces to bring normalcy in the state. Many fact-finding reports have highlighted the active collusion of the local administration and police in enabling the violence. The Supreme Court has also issued the Election Commission of India a notice. The petitioners, advocate Ranjana Agnihotri, social activist Jitendra Singh, have requested the court to form an SIT to probe the post-poll violence incidents.

The plea reads, “The petitioners are espousing the cause of thousands of citizens of West Bengal who are mostly Hindus and are being targeted by Muslims to take revenge for supporting BJP as they want to crush Hindus so that for years to come the power may remain with the party of their choice.” The petitioners requested the court to direct “the central government to exercise its power conferred by Article 355 and Article 356 keeping in view the deteriorating condition posing a threat to sovereignty and integrity of India.”

The Calcutta High Court had earlier ordered the NHRC to form a committee to investigate the cases of post-poll violence in the state. The committee submitted the report on Wednesday (June 30).