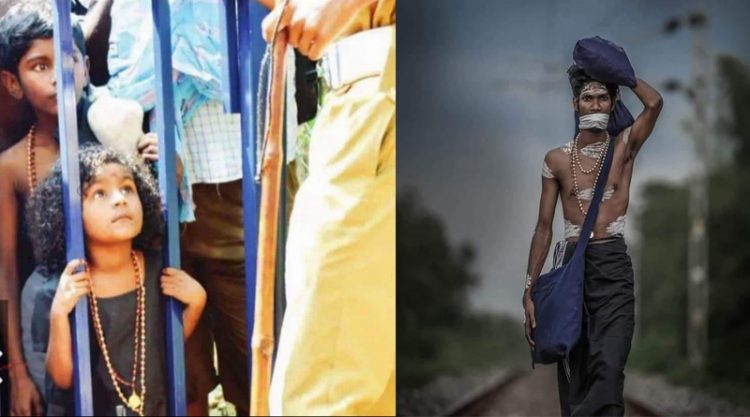 Police arrested devotees who were chanting manthras in Sabarimala. Devotees were standing near the Aravana counter as it was raining. Police asked them to move from there and devotees protested against police’s act by chanting prayers near Nadappanthal.The devotees shocked the police by 10.30pm on November 18, by congregating in ‘valiayanadapandal’ all on a sudden and chanted prayers. They were several hundreds in number. When police asked them to stop they said, they would stop it after closing the shrine in the night accompanied by ”harivarasanam”. Once the shrine closed, police came to arrest one of the devotees who looked and sounded like a ‘leader’. His name is Rajesh from Ernakulam. He asked the officers what was his fault. Police said, it is because of the 144 prevailing there. He asked whether his prayers and namajapa are illegal. When police insisted on arrest, all other devotees were in the chorus demanding to arrest all of them; if namajapa is wrong all are guilty. So they wanted, demanded the arrest of all. This ended up in police brutality and mass arrest.Police forcefully arrested devotees including women.

Police commanded devotees to stop chanting prayers. But devotees took firm stand as they will return only after Harivarasanam, the last ritual just before the temple closure. Police arrested devotees soon after harivarasanam .Rajesh said, he had to do the neyyabhishekam tomorrow morning, but, if police insist on arrest, he is ready for it. Rajesh told the media that hundreds of devotees have come to Shabarimala due to devotion and police said, chanting “sharanam” is wrong. They are insulting Hindus. He is even ready for an arrest alone. But, the other devotees, hundreds of them, shouted that they will go with him. Rajesh said, he is ready to go to jail for the sake of Ayyappa. He said, he is doing namajapa in a Hindu temple, not in church or mosque. He told the channels that let the whole world see it. The first time in the history of Shabarimala an arrest is going to happen in Sannidhanam. That too for chanting “Sharanamayyappa”.

They were ready to go back after the closing of the shrine. But, police complicated the issue. The other devotees are not ready to leave him alone in the hands of police. If at all an arrest takes place, all are with him for a “collective arrest”. The devotees questioned the reason for 144. Police did not have any reply. They said, they can ask the court.Now, by 11.30pm, hundreds of them are being arrested. First time the Sannidhanam becomes this much unrest. The arrest of devotees from Sannidhanam first time in the history. All are taken to the Sannidhanam police station. They are sitting in the courtyard. Devotees maintain, they are ready to undergo arrest after neyyabhishem tomorrow. Even old ladies are among the arrested devotees.

Police take them out by force and took them to Pampa in two batches and then to Manayar camp. Sixty eight devotees are in A R Camp.. Even media persons are asked to move out. Devotees are dragged by the police to remove. First time in the history Sannidhanam witnesses such a rude incident. Irumudikkettu kicked by the police boots. Some of them thrown away by the police. One devotee is injured and taken to the hospital. Huge protests are arising in the whole state,prayer chanting protests have been conducted to various police stations and to CM’s house,Cliff House .Devotees also marched to Devaswom Board President A Padmakumar’s house in Aranmula.
ShareTweetSendShareShare