I pray that this is my last darshan of Sri Ramlala in tent, said Bhaiyaji Joshi 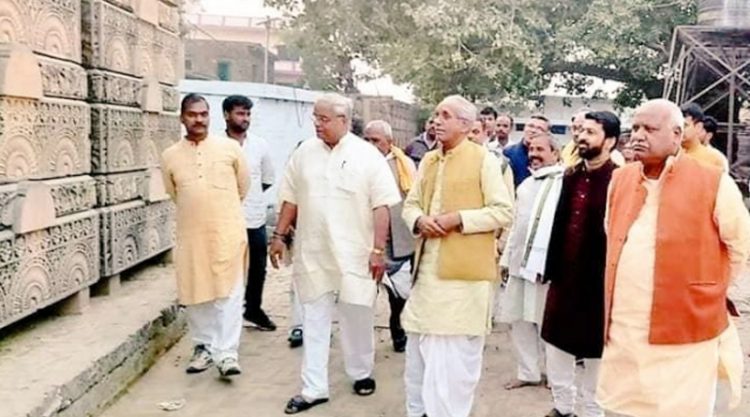 RSS Sarkaryavah Shri Bhaiyaji Joshi visited Ayodhya on November 19 and had ‘darshan’ of Shri Ramlala. He also met some senior saints and then visited the Karsevakpuram where the stone carving for Shri Ram Temple is going on for over two decades. He also inspected the preparations for the Mega Rally to be held in Ayodhya on November 25.

RSS Sarkaryavah Shri Bhaiyaji Joshi along with Sahsarkaryavahs Shri Dattatreya Hosabale and Dr Krishna Gopla had ‘darshan’ of Shri Ramlala . He was also accompanied by RSS Kshetra Karyavah Shri Ramkumar Verma, Prant Pracharak Shri Kaushal Kishore, Prant Karyavah Dr Anil Mishra, Sah Prant Karyavah Shri Prashant Bhatia and vice president of Vishwa Hindu Parishad Shri Champat Rai.
The RSS Sarkaryavah and other leaders reached Ayodhya at around 12.15 pm and directly went to the Janmabhoomi to have ‘darshan’ of Shri Ramlala. Then, he visited Mahant Nritya Gopal Dasji at his Ashram. Then he reached Karsevakpuram, where the work of carving the stones for reconstruction of Sri Ram Temple is going for over two decades. He inspected the progress of the stone carving. From Karsevakpuram he visited Bade Bhaktamal Ki Bagia at Parikrama Marg to inspect the preparations for November 25 mega rally. The Ground is enormous and can accommodate over 1.25 lakh people. The Rambhaktas are working hard to pack this ground on November 25.
Talking to media persons after having ‘darshan’ of Sri Ramlala, Shri Bhaiyaji said: “We are praying that this ‘darshan’ of Sri Ramlala in the tent is the last and the situation should emerge that the next time we visit Ayodhya, we have the darshan in a grand temple. We would not say anything about the Government, but we would surely urge the court to deliver its verdict on the issue soon and to respect the sentiments of the Hindus. We hope the court would clear all the hurdles blocking the reconstruction of the temple. The people who are sitting in power have to take any decision as per their abilities. Whether any law has to be enacted or not has to be decided by them only.” Shri Bhaiyaji Joshi also that the society would respond to the call of the saints and the entire country would feel the sentiments of the Hindu society.
ShareTweetSendShareShare