Ram Mandir is a symbol of National Pride 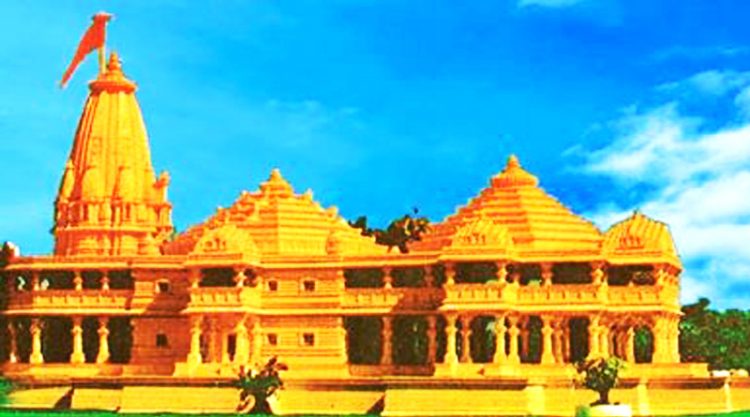 Though the nature of land dispute in Ram Mandir issue at Ayodhya and that of Somnath Temple is totally different, the Supreme Court’s decision to not speed up the Ram Mandir case reminded me of a debate that took place in 1948 about the reconstruction of Somnath Mandir – another temple destroyed by Islamic invaders.

This debate, between K.M. Munshi and Pandit Nehru, has been recorded by Dr. Munshi in his monumental book ‘Pilgrimage to Freedom’. Here are some excerpts –

“In December 1922, I went on a sort of pilgrimage to the broken shrine…Desecrated, burnt and battered, it still stood firm – a monument to our humiliation and ingratitude. I can scarcely describe the burning shame which I felt on that early morning as I walked on the broken floor of the once-hallowed Sabhamandap..”

“At the end of October 1947, I was with Sardar…. when a telephone message was received ..that Sir Shah Nawaz Bhutto had invited the Indian Army to take over Junagadh. When Sardar conveyed the news to me, he said “So it is Jaya Somnath”.

The reconstruction of Somnath Temple was initiated by Sardar Patel, then home minister of Bharat, executed by K.M. Munshi, a Cabinet Minister in central government and inaugurated by Dr. Rajendra Prasad, then President of Bharat. But it was also met with opposition.

‘In November 1947, Sardar ..visited the temple. At a public meeting, Sardar announced: “On this auspicious day of the New Year, we have decided that Somnath should be reconstructed. You, people of Saurashtra, should do your best.”

Munshi also believed,”The temple of Somnath is not just an ancient monument; it lived in the hearts of the whole nation and its reconstruction was a national pledge.” But he adds, “Jawaharlal called me and said: “I don’t like your trying to restore Somnath. It is Hindu revivalism.”

The difference of opinion between Patel and Munshi and Nehru is illustrative of two different ideas of Bharat. Pandit Nehru was not anti Bharat but his idea of Bharat was rooted in an Eurocentric school of thought. On the other side was an idea of Bharat rooted in this soil and our ancient spiritual tradition.

Munshi wrote a letter to Pandit  Nehru. The excerpts –

“When the whole scheme was discussed by Sardar with Bapu, he stated that it was alright except that the funds necessary for reconstructing the temple should come from the public. Thereafter, the idea that the government of India should finance the reconstruction of the temple was given up.”

“You pointedly referred to me in the cabinet as connected with Somnath. I am glad you did so; for I do not want to keep back any part of my views or activities, particularly from you who have placed such abundant confidence in me all these months. I have helped in building up several institutions. If similarly I am now helping to build Somnath as a centre of religion (Dharma) and culture, a university and a farm, it is only as a humble task to which I have been called…I can assure you that the ‘Collective Sub-conscious’ of India today is happier with the scheme of reconstruction of Somnath sponsored by Government of India than with many other things that we have done and are doing.”

“Yesterday you referred to ‘Hindu revivalism.’ I know your views on the subject; I have always done justice to them; I hope you will equally do justice to mine. Many have been the customs which I have defied in my humble way through literary and social work to shape or reintegrate some aspects of Hinduism, in the conviction that alone will make India an advanced and vigorous nation under modern conditions.”

“It is my faith in our past which has given me the strength to work in the present and to look forward to our future. I cannot value freedom if it deprives us of the Bhagavad Gita or uproots our millions from the faith with which they look upon our temples and thereby destroys the texture of our lives.”

Shri V. P. Menon, who was then Advisor to the States Ministry, replied to Munshi’s letter saying,

“I have seen your masterpiece. I for one would be prepared to live and, if necessary, die by the views you have expressed in your letter”. And so the reconstruction went ahead.

When the time came to install the deity, Munshi approached Rajendra Prasad and asked him to perform the ceremony, but added a rider, “that he should accept it only if he was prepared not to fail us.”

Munshi says, “He promised that he would come and install the deity whatever the attitude of the Prime Minister, and added: “I would do the same with a mosque or a church if I were invited”.. but “when it was announced that Dr. Rajendra Prasad was to inaugurate the Temple, Jawaharlal vehemently protested”.. Still, “Rajendra Prasad kept his promise. However, his speech delivered at Somnath was published in all the papers, but was cut out from the official organs.”

It is ironical that Nehru, the Indian Icon of liberalism and freedom of expression, should make sure that the speech of the President is censored.

In this manner despite opposition Somnath was rebuilt and today the magnificent  shrine attracts lakhs of devotees from across the world. However, because of 60 years of rule by one regime, the proponents of the Nehruvian idea of Bharat, with the patronage and support of the government, have proliferated in academia and media. Hence, history is repeating itself and the opposition to the Ram Temple in Ayodhya is even more vocal.

But that does not take away from crores of Bharatwasis who believe in the integral and holistic spiritual tradition of Bharat which is in tune with the idea of the “collective -sub conscious of Bharat” that Sardar Patel, K.M.Munshi, Dr. Rajendra Prasad, Mahatma Gandhi, Dr. Radhakrishnan, Pandit Madan Mohan Malaviya and many such stalwart architects of modern independent Bharat believed in.

The curious should read the correspondence in entirety in the monumental book ‘Pilgrimage to Freedom’ by K.M.Munshi (page  559 to 566).