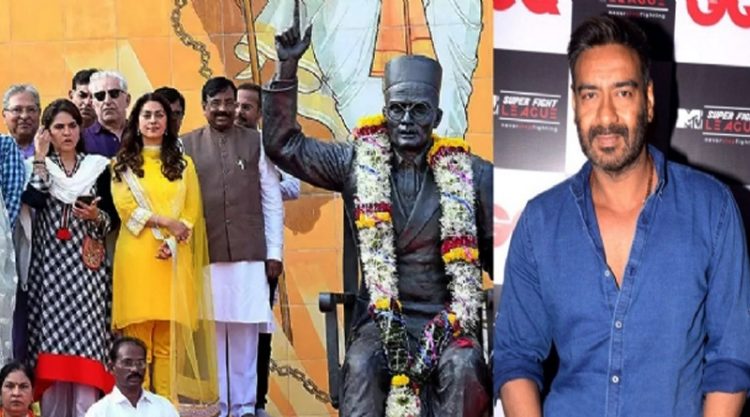 Juhi Chawla decries the violence perpetrated over CAA and said that it is easy to break something but difficult to repair the same. Ajay Devgn says that one should not add fuel to the fire and not speak without knowing all the details.

Some Bollywood stars have used the JNU violence to promote their upcoming movies and ended up sharing stage with the ‘Tukde Tukde’ gang and those who raised ‘Bharat ki Barbadi’ slogans. This angered moviegoers across the country and calls for #BoycottBollywood trended on Twitter. However, apart from the usual suspects in Bollywood who choose to hate Modi no matter what, a large section of the Hindi film industry has taken a saner approach and called for an educated debate on CAA and NRC.
At a rally in Mumbai on 8th January, many actors from the film industry got together and express their support for the Citizenship Amendment Act. Juhi Chawla spoke at the rally and said that we need to understand what CAA is all about before coming to conclusion and opposing it blindly. She said that one needs to speak only after understanding the details of what has happened. She also decried the violence perpetrated over CAA and said that it is easy to break something but difficult to repair the same.
Actor Dalip Tahil said that even before the CAA was put into practice, people started opposing and resorted to violence. He said that some have made it a habit to oppose whatever Home Minister Amit Shah says and violence emanates always from the same locations like JNU, Jamia and AMU. He also said that the violence at JNU seems to be scripted to invoke fear and violence should have no place in our lives.
While many Bollywood stars used the CAA and JNU violence to push their careers and films, top actor Ajay Devgn has said that violence is not a solution to anything and it is harming our country. He has questioned the agenda behind the violence over CAA. Ajay Devgn was speaking to the media while promoting his upcoming movie ‘Tanhaji: The Unsung Warrior’.
When asked for his take on the JNU violence, he said, “When we say something, it is taken seriously, either in a good way or a bad way. But till you are not well-informed, you have no right to speak, I would say. We cannot add to the confusion. We need to know first. Why it is happening or who is doing it? What is the agenda behind it? Till we don’t know we have to keep quiet. If people think that it is complicit, then it is stupid. We cannot add fuel to fire.”
Ajay Devgn’s movie on Marata warrior Tanhaji releases on January 10th while Deepika Padukone starrer Chhapaak releases on the same day. Many have opined that Deepika used the violence at JNU to promote herself and the film by creating a controversy ahead of its release. Calls for #BoycottChhapaak were trending on Twitter where netizens expressed their displeasure at Deepika using the JNU violence to promote her movie and lend her support to anti-national forces.
ShareTweetSendShareShare