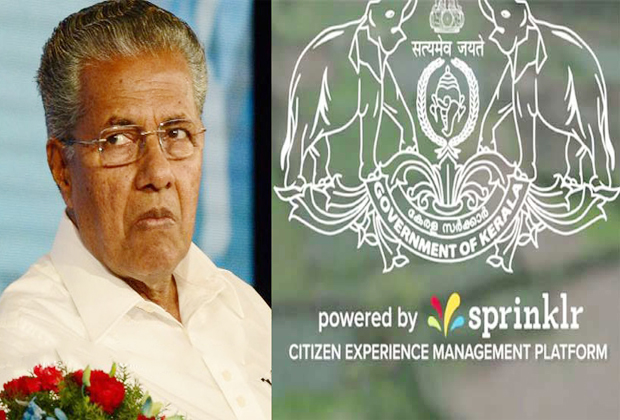 The Opposition has intensified attack on the CPM-led LDF government and Chief Minister Vijayan over the COVID-19 Data Scam in which the state government allowed Sprinklr, a blacklisted US-based company to siphon off personal data of people under quarantine in Kerala without their permission.

The controversy took an unexpected turn as the Opposition parties pointed finger of suspicion at the Chief Minister Vijayan’s family. Congress MLA P T Thomas alleged that Exalogic Solutions Pvt Ltd, an IT firm owned by Pinarayi’s daughter T Veena, had links with Sprinklr. “The Bengaluru-based IT company’s website has been suspended ever since the controversial deal became public,” Thomas said. Thomas demanded a thorough probe into the suspicious links between the two firms and also sought an explanation from the Chief Minister in this regard.

Bengaluru-based Exalogic Solutions Pvt Ltd is owned by Chief Minister Pinarayi Vijayan’s daughter T Veena. A ‘One Person Company’, Exalogic is involved in software publishing, consultancy and supply, which include production, supply and documentation of readymade (non-customised) software, operating systems software, business and other applications software. According to the records, the Exalogic had received financial assistance from industrialists.

“Handing over sensitive information to a private entity is a clear violation of fundamental rights and against the security of the nation,” an opposition leader said. According to reports, the state government has handed over the personal data of around 2 lakh people to the Sprinklr. Studies suggest that the data of one person costs tens of thousands of rupees.

BJP state president K Surendran said that Chief Minister Pinarayi Vijayan should disclose the truth about Sprinklr controversy to the people. He said that the CM was responsible for the signing of the contract and everything was a lie that the IT Secretary revealed.

“The Chief Minister should be willing to tell the public about whatever he knows on the contract. The office of the Chief Minister is similar to the office of former CM Oommen Chandy. Things have reached a stage where the CM’s office is handled by family members and other associates,” said K Surendran.

In a desperate attempt to save the government, IT Secretary M Sivasankar revealed that he chose the company for the survey related to COVID-19 using his ‘discretionary powers’. However, as per the Rule of Business, the IT secretary has no such discretionary power to choose the company. According to the rules, no official is entitled to wield any discretionary power to grant a contract to any company. The IT secretary’s bizarre claim has exposed that there was a clear violation in the Rule of Business and the deal was illicitly brokered.

Amidst the controversies raging over the data scam, CPM is facing a new ideological crisis as the state government’s agreement with the US firm contradicts the party’s previous stance on data security. Kerala Government’s decision has put the CPM all India leadership in an awkward position as far as its ideological stance on data security is concerned. The CPM leadership has been highly critical of the data collection by the Union Government, especially in the AADHAR related matters. As per reports, the central committee of the CPM has sought a detailed report from the state CPM unit in this regard.