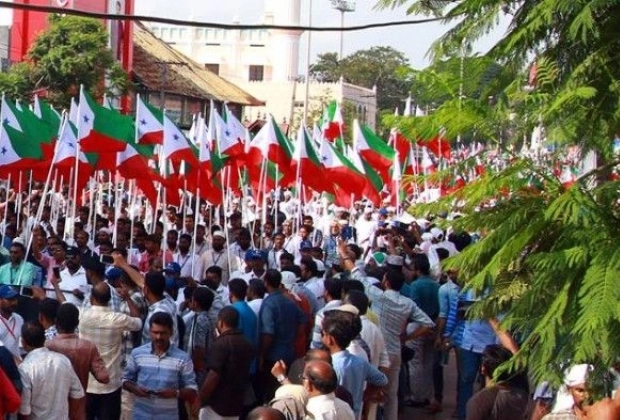 In a new twist to the Kerala gold smuggling case where the state Chief Minister’s office is in the dock, the National Investigation Agency (NIA) has found links of Popular Front of India (PFI) in the case.

The PFI’s role in the case emerged following two fresh arrests by the anti-terror agency on Saturday.

Muhammad Ali Ebrahim and Muhammad Ali were held by the NIA on Saturday (1 August) after they were found to be part of the conspiracy in the case that rocked Kerala and has caused a huge dent to the image of Chief Minister Pinarai Vijayan, who continues to maintain that this was a private affair concerning M. Sivasankar, a senior IAS officer who held the dual post of secretary to Kerala Chief Minister Pinarayi Vijayan and was also the state IT secretary, and his office has nothing to do with it.

Besides aiding and assisting arrested accused Jalal A.M. in collecting the smuggled gold from Ramees K.T. at Thiruvananthapuram and distributing the contraband amongst other conspirators, the NIA said the two accused were involved in other activities also.

NIA investigators later found that Muhammad Ali is a member of the PFI and was earlier charge-sheeted by Kerala Police in ‘Professor’s Palm Chopping Case’ but got acquitted after trial in 2015.

The NIA has so far arrested six persons in the case this week, tatalling 10 so far.

On July 30, the NIA arrested Jalal A.M. and Said Alavi E. for conspiring with already arrested accused Ramees K.T. and for smuggling gold through diplomatic baggage addressed to the United Arab Emirates (UAE) consulate at Thiruvananthapuram.

The NIA arrested two more accused on July 31, identified as Mohammed Shafi P. and Abdu P.T. — for playing similar roles in the crime.

Involvement of PFI members in the gold smuggling case has given a new twist to the case and NIA investigators suspect major conspiracy as the PFI now claims to have its units in 22 states.

The gold smuggling case first surfaced when P.S. Sarith, a former employee of the UAE Consulate here, was arrested by the Customs on July 5 when he allegedly was facilitating the smuggling of 30 kg gold in a diplomatic baggage from Dubai to Thiruvananthapuram.

The case became murkier when the name of Swapna Suresh, a former employee of the UAE Consulate and later employed with the Kerala government’s IT Department, came to light. Her links with senior IAS officer M. Sivasankar came up later during the investigation. Sivasankar was Principal Secretary to the Chief Minister and Information Technology Secretary before he was removed from the post after the racket was busted.

Another accused, Sandip Nair of Kochi, was arrested on charge of direct involvement in the smuggling. Swapna and Sandip were arrested by the NIA from Bengaluru.