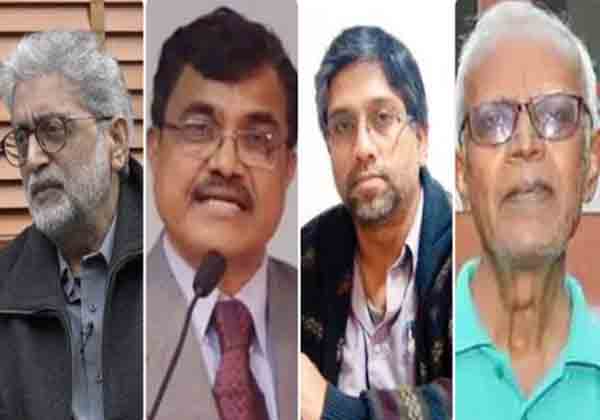 According to reports, all of them are accused of having committed offences under anti-terror law Unlawful Activities Prevention Act (UAPA), and offences related to sedition, waging war against India, criminal conspiracy etc., under the Indian Penal Code. They are also arraigned for conspiring to “further the ideology of terrorist organization CPI (Maoist)”, “bring hatred and disaffection towards the Government established by law” and “fostering enmity between different groups on grounds of religion, caste and community”.

In the charge sheet presented in the court on Friday, the NIA has charged Anand Teltumbde, Sagar Gorkhe, Ramesh, Jyoti Jagtap and Milind Teltumbde in addition to Gautam Navlakha, Professor Honey Babu and Stan Swamy. A day earlier, the NIA on Thursday arrested Father Stan Swamy in the case. However, in earlier inquiries by the NIA, Swamy denied any involvement in Bhima-Koregaon.

NIA spokesperson and Deputy Inspector General of Police Sonia Narang said that the case related to the violence on January 1, 2018, in which one person was killed and several people injured after clashes at the 200th anniversary celebrations of the Battle of Koregaon near Pune. The charge sheet presented in the court alleges inciting violence against the eight accused and all the evidence has also been collected.

According to the NIA, on January 24 this year, received the case for investigation. On the basis of that, activist Father Stan Swamy, who worked with the tribals, has also been arrested from his house in Jharkhand. Apart from him, the chargesheet also includes Goa Institute of Management professors Anand Teltumbde, Jyoti Jagtap, Sagar Gorkhe and Bhima Koregaon Shaurya Divas Prerna Abhiyan group activists Ramesh Gaichor and Milind Teltumde. Teltumde is still absconding. NIA is looking for him.

Who is Stan Swamy?
Stan Swamy, a member of CPI (Maoist) from Ranchi, Jharkhand in connection with the Bhima-Koregaon case. The 83-year-old Keralite, also a Jesuit priest, was nabbed from his home in Jharkhand capital Ranchi by a team of NIA officials from Delhi. Stan has been sent to jail till October 23.

According to reports, the NIA has recovered from Stan’s home the literature and other material related to the banned Communist terrorist outfit CPI (Maoist). The 83-year-old missionary was in contact with other accused in the case and was actively involved in the activities of the CPI (Maoist).

“Stan Swamy received funds through an associate for the furtherance of CPI (Maoist) activities. Documents related to communications for furthering the activities of CPI and propaganda material of the CPI (Maoist) as well as literature, seized from his possession,” NIA sources said. Hailing from Kerala, Stan Swamy has been working for tribal people in Jharkhand for over five decades.

The case pertains to 2018 violence that erupted in Pune at an event to mark 100 years of the Bhima-Koregaon battle. One lost life and several were injured in the clash. The police had then filed 58 cases against 162 people.

The investigation also claimed to have uncovered a plot to assassinate Prime Minister Narendra Modi. Stan has been coordinating the activities of several NGOs in various parts of the country. He is also the convenor of the Persecuted Prisoners Solidarity Committee (PPSC), a frontal organisation of the CPI (Maoist).