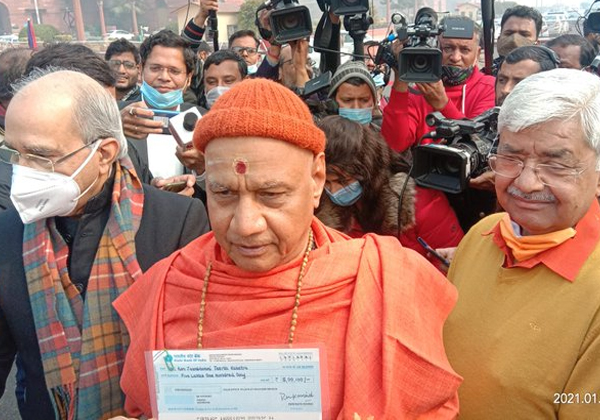 President Ram Nath Kovind made the first contribution towards the reconstruction of the Ram temple in Ayodhya on Friday. The President donated a sum of Rs 5,01,000 to the Ram Janmabhoomi Teerath Kshetra Trust.

A delegation comprising Vishva Hindu Parishad’s international working president Alok Kumar, Govind Dev Giri, treasurer of the Ram Janmabhoomi Teerath Kshetra Trust and others had come to seek the President’s contribution for the construction to the temple.

“He is the first citizen of the country so we went to him to initiate this drive. He donated a sum of Rs 5,01,000,” ANI quoted VHP’s Alok Kumar as saying.

The trust estimates the total cost of constructing the temple complex at Ayodhya will be about Rs 1,100 crore, including about Rs 300-400 crore to be spent on the temple itself.

Madhya Pradesh Chief Minister Shivraj Singh Chouhan also handed over a cheque of Rs 1 lakh to VHP as a contribution to the reconstruction of Ram temple.  “One brick from my family shall also be placed in the construction Lord Ram’s Temple. This is not a Ram Temple really, is a national temple,” he said in a Hindi tweet he posted along with photos.

In Patna, launching the Samarpan Nidhi Sangraha Abhiyan, BJP leader Sushil Kumar Modi said, “I hope every Hindu family in Bihar contributes towards the building of the beautiful temple. I’m sure that whatever fund is required for the temple, we will get it out of people’s cooperation.”