Temple in Srinagar closed due to militancy reopened after 31 years

Shital Nath Temple is located in the Habba Kadal area of Srinagar. 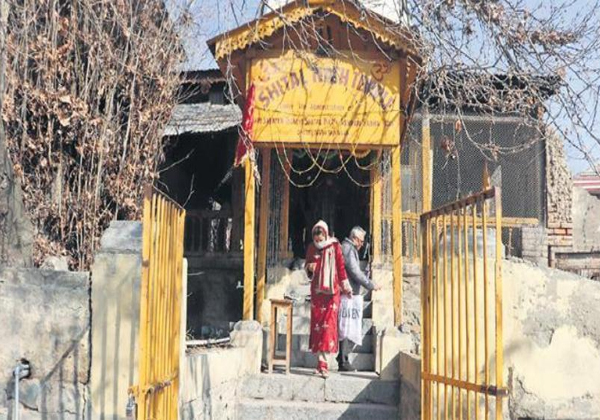 The Left-Liberals who crib over the delay in restoration of 4G internet connectivity in Kashmir after a gap of 500 days must remember that several temples that were shut during the years of militancy were yet to be opened for Hindu devotees. A few were opened very recently — after more than three decades. But the ‘outrage gang’ has not cared to spare a thought on hapless Hindu devotees.

The Sheetal Nath Mandir at Kralakhud in Srinagar was reopened for devotees on February 17 after 31 years. The temple bells rang as Basant Panchmi puja and havan were being performed.

The temple was forcefully closed after Islamic terrorism raised its ugly head in the ’90s when Farooq Abdullah was the Chief Minister of the State, and Mufti Mohammad Syed was Union Home Minister.

Around 30 Kashmiri Hindus attended the prayers and ‘prasad’ was also distributed among the devotees. “We have formally reopened the temple,” said Upendra Handoo, the priest, recalling how the temple was closed in 1990.

Shri Handoo said earlier Basant Panchmi puja in Srinagar used to be performed at the Sheetal Nath Mandir where hundreds of Kashmiri Hindus congregated before militancy began. He said the day is very significant for the Kashmiri Pandits as the community starts the formal education of their new-borns on this day.

“The reopening of the temple is a big confidence-building measure and would send out a message outside the Valley that Kashmir is safe,” Shri Handoo said. He also said the Ashram Sabha members had urged the government to take more steps to ensure return of Hindus to the Valley.

Handoo is also a trustee of Shri Sanathan Dharma Sheetal Nath Ashram Sabha which looks after the maintenance of the temple.

Meanwhile, the Kashmiri Hindus thanked the Modi Government and said it all happened because of the abrogation of Article 370 and 35A.

In the early 1940’s when VD Savarkar visited Kashmir, he addressed a public meeting and predicted that nefarious designs of the Muslim League. He also said that Jinnah will be disastrous for Kashmir and warned Maharaja Hari Singh of Nehru and Sheikh Abdullah nexus.

He also said that “the demand of Pakistan by Muslim League will take shape in the near future. Britishers are supporting them, and Congress leadership is confused only because we stand for Akhand Bharat. If Pakistan becomes a reality, their first claim will be on Kashmir, and everyone including Maharaja has to be vigilant.”