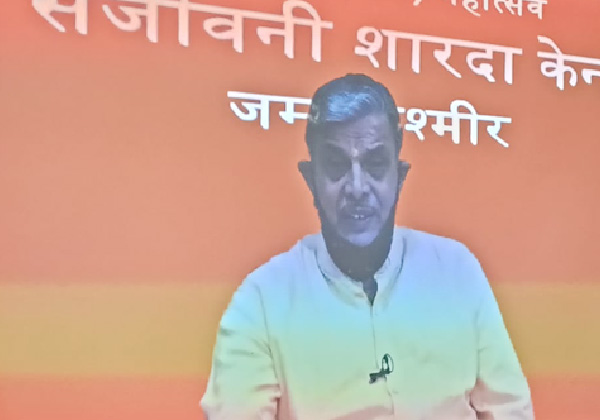 Jammu. This year the Navratri or Hindu New Year of Chaitra month, known as Navareh in Kashmiri language is special for displaced Kashmiri Hindu society. For the first time, after three decades of displacement, the Kashmiri Hindu Displaced Society celebrated Navareh Utsav as a day of sacrifice and dedication, resolve and valor. The festival organised by Sanjivani Sharda Center, Jammu Kashmir, celebrated 12th April, as Tyag Divas, commemorating the supreme sacrifice of Shirya Bhatt, on 13th April Navareh as Sankalp Diwas or Day of Reconciliation and concluded on 14th April, to celebrate the Victory of Emperor Lalitaditya’s as Shaurya Divas. The three-day long festival ended with an address of RSS Sarkaryavah Dattatreya Hosabale ji, which was broadcast live on social media by Sanjivani Sharda Kendra. The Navareh Mahotsav, 2021 was supported by more than 150 social and religious organizations of the Union Territory.

In his address, while wishing Navareh to Kashmiri Hindus in Jammu and Kashmir, at home and abroad, Dattatreya Hosabale, said that there is power in resolution and when the resolution is for Rashtra Dharma, for one’s duty towards his nation and society, it’s power increases a hundred times. He said that our ancestors fought with foreign invaders for centuries but they never gave up. Just as Shirya Bhatt ji had set the example of renunciation and dedication and Lalitaditya ji had set the example of Shaurya/velor, it is also necessary to follow and learn from the teachings of their lives. While referring to the valor of Lalitaditya, Dattatreya Hosabale, describes how Lalitaditya, with the support of Bappa Rawal, defeated the Arab invaders.

Sarkaryavah also talked about the sacrifice of Kashmiri Hindus in his address. He said that the way Kashmiri Hindus have protected religion through sacrifice, and survived in crisis for the past several decades, is exemplary in history. Tika Lal Taplu ji, Justice Neelkanth Ganju ji, Sarla Bhatt, Prem Nath Bhatt and many people like them have become victims of religious fanatics, their only crime was that they were born as Hindus and they lived in Kashmir.

To protect the Kashmiri Hindus, Guru Tegh Bahadur ji also sacrificed his own life. Kashmiri Hindus were displaced many times, in 1989-90 it was seventh displacement of Kashmiri Hindus and this would prove to be the last displacement. He said that he is confident that the Kashmiri Hindus’ resolve to celebrate the next Navareh in Kashmir will be meaningful Raising the morale of Kashmiri Hindus, Dattatreya Hosabale also gave the example of the Jews and Tibetans. He said that when the Jews were driven from their motherland, they were scattered in many countries of the world, but every generation took a pledge that they would celebrate the next Easter in Israel and finally succeeded in the struggle. The Tibetan people also had to leave Tibet due to the invasion by China, but the Tibetans still take a vow to return back to Tibet one day. He said that the soldiers of the Indian Army, the paramilitary force and the Jammu and Kashmir Police also made sacrifices to stop the jihadi rage in Jammu Kashmir, we should also remember them.

Discussing the current political scenario and developments in Jammu Kashmir, Dattatreya Hosabale said that the removal of Sections 370 and 35-A is a milestone for the people of Union Territory. For the development and upliftment of Jammu Kashmir, the government has been doing works, which were pending for many years, this achievement is commendable. Earlier in the inauguration of the program, the Vice President of Sanjeevani Sharda Center, Avtar Krishna ji thanked all the organizations that contributed to Navareh Mahotsav 2021 and said that the address of Rashtriya Swayamsevak Sangh Sarkaryavah ji, has strengthened the confidence of Kashmiri Hindus that the whole of India and the world stands with Kashmiri Hindu Society.