The Govt Which Does Not Give A Single Penny Now Realized. 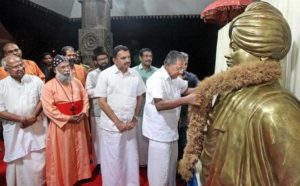 The Govt Which Does Not Give A Single Penny Now Realized.

For their survival, Kerala Communists now have begun to adore  the national icon Swami Vivekananda, who was once a Hindu imperialist  to  them.

The ‘U’ turn of the Indian (Kerala specific) Communist stand on Swami Vivekananda, and other nationalists is amazing.  On the  occasion of 125th Anniversary of Swami Vivekananda’s visit of Kerala celebration, the Chief Minister Pinarayi Vijayan, a hardcore Communist garlanded the Statue of Swami installed at Kowdiar, Trivandrum by Kanyakumari Vivekanda Kendram and Bharatheeya Vichara Kendram. On this occasion, Pinarayi Vijayan quoted Swami’s words “Bring light to poor, more light to rich” in order to justify his government’s step to reservation to economically backwards in the upper caste in the Travancore Devasom Board Service. Now they are forced to eat what they had vomitted in the 1940s. In 1948, Indian Communists took a step on our national heroes. They started propaganda to humiliate our national heroes. Now they are forced to change or time has forced them to change. The relevance of communism has lost all over. The available Communists in certain isolated isles like Kerala are in the struggle for survival. Like the idiom ‘Drowning man catches a straw’, for the survival Kerala Communists now have begun to stick more on  the national icon Swami Vivekananda, who was a Hindu imperialist once to the them.
Change of Face
Now they are forced to take back Swami Vivekananda from the dustbin like a rotten egg, calling him a wild spiritualist.  Once Karl Max uttered, “Religion is the sigh of the oppressed creature, the heart of a heartless world, and the soul of soulless conditions. It is the opium of the people”.  If he revisits the old Communist holy lands including Kerala and Bengal, no doubt he will rewrite it into ‘the Party is the opium of mankind’. As the part of their survival struggle earlier they exalted hard core Muslim fundamentalists, who participated in the 1921 Hindu homicide of Malabar like Wariamkunnathu Kunjabdul Hagi, to the rank of martyrs of Kerala. They used their historians to write Martyrs Dictionary of Freedom Movement to exalt them as heroes at the cost of public exchequer. But all their efforts in this direction were found counterproductive and Islamic fundamentalism turned as another vital threat to communism in Kerala.  Hence they are searching in their own dung-pit. That is why Pinarayi Vijayan garlanded the Statue of Vivekananda erected by Sangha Parivar a few years back.
It is because now Communism, as an endangering species, remains only in the isle of Kerala. That is why the same comrades who had once denounced Sri Ramakrishna as a homosexual pervert, Swami Vivekananda as a Hindu Spiritual Imperialist, Netaji Subhas Chandra Bose as Imperialist Agent and Tojo’s dog (boot licker of Japan),  Sri Aurobindo as a dirty  war-monger, Rabindranath Tagore as a pimp/procurer and stalwarts of the freedom movement such as Sardar Patel as the progeny of pigs, etc. have been forced to eat what they had vomitted earlier.
Communists Tantrums
For the construction of Kanyakumari rock Memorial, Eknath Ranade approached several leaders in India irrespective of their political ideologies. It is because Swamiji was a great patriot for all generations to come. When he approached Jyoti Basu, the latter questioned, “How dare you come to me for Vivekananda, I am a communist?” On the other hand Chief Ministers of every state made comfortable  donations towards the Vivekananda Rock Memorial except the Chief Minister of Kerala EMS Namboodiripad, the Messiah of Indian Communists. When the communists came to power in West Bengal, they removed Swami Vivekananda from several textbooks; these are only some instances of the anti-national actions of the communists. The communists in Kerala work hard to exalt all the Moplah Rebellions as Peasant Agitations and hence the part of National Movement. Finally they succeeded and those communal bigots who participated in the homicides of Hindus in the 1921 Moplah Riot, were entitled to receive Freedom Fighters’ Pension by subsiding original freedom fighters of Kerala.
The time has compelled them to change their stand on the great Indian patriots and nationalists and they have realised that otherwise they have no existence in this land of Sanatan Dharma. If the current situations persist for another quarter of century, the present day communists will be forced to recognise Dr KB Hedgewar and MS Golwalkar (Guruji) and garland their statues. Let us wait for such dawn in the horizon of emerging Bharat!