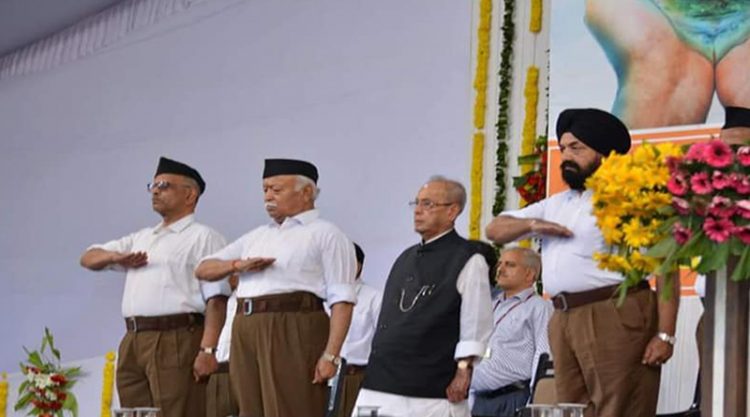 Nagpur (VSK): Laying all speculations and probabilities regarding his address to Rashtriya Swayamsevak Sangh tritiya varsh sangh shiksha varg sampan samaroh former President Dr. Pranab Mukherjee called for freeing the public discourse from all forms of violence, physicaly and verbal to make India a happy country in the world.

Stating that he accepted the invitation of RSS as he wanted to share his understanding of the concepts of nation, nationalism and patriotism in the context of India that is Bharat former president explained at length what these concepts meant to him.

He said that India has been an open society connected to the world by silk and spice routes that exchanged besides mercantile and commerce the ideas of culture, faith and inventions as the merchants, scholars and sages traversed the mountains and crossed the deserts, seas and oceans. Nalanda, vikramshila, takshashila, valabhi, somapura were some of the universities that catered to the educational and academic needs of the world for over 1800 years.

Let the objective of spreading peace, harmony and happiness inform the formulation of our public policy and guide all the actions of our states and citizens in their everyday life. This and only this will be able to create a happy nation where nationalism flows automatically” the former president concluded.

Breaking the RSS tradition Sarsanghchalak Dr. Mohan Bhagwat who spoke before the chief guest expressed gratitude to Dr. Pranab Mukherjee whom he described as rich in knowledge and rich in experience for accepting invitation to address Swayamsevaks drawn from all over the country.

Sarsanghchalak Ji categorically stated that the RSS always upheld the age old tradition of India of celebrating the diversity and to experience the latent unity in the diversity. Everyone born in this country is a “Bharatwasi” and difference of language sect or Sampradaya and Political ideologies notwithstanding all are one. The RSS respects this diversity and experiences the inherent unity.

While explaining organizational power of Sangh is not for dominating, dividing and destroying the society but the power of Sangh is for purely devoted to the motherland. Though, there are many thoughts of school but aim is served the motherland. RSS is binded for Samajunnayan. There are many divisions in the society but RSS build the man with well character for society. Now the period of “Anukulta” but till as a “Sajagata” for the all Swayamsevak.

Earlier Pranab Mukharji visited  house of  RSS founder Dr. K.B. Hedgewar in mahal and worte in the visiter’s book – ‘Today I came here to pay my respect and homage to a great son of Mother India K.B. Hedgewarjee’ – Pranab Mukherjee