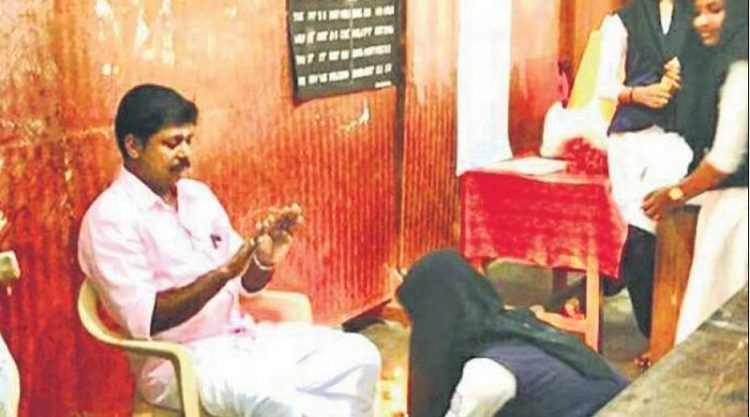 Islamic radicals stir controversy over Gurupurnima celebrations after the picture of a Muslim girl, with headgear, prostrating before her teacher as per the Bharatiya tradition, went viral on social media

Guruvandan is a Bharatiya tradition from time immemorial. It served as a cementing force between the teachers and the taught. But, when it happens in a school managed by Hindutva activists it raises all eyebrows in this part of the country. Then the legendary Srikrishna-Sandeepani relation and Arjun-Drona relations are swept under the carpets. The reports from Cherppu in Thrissur District, Kerala vindicates this fear.
CNN School, a 103-year-old educational institution for students from LKG to 12th Standard, with a strength of more than 4,000 students, celebrated Vyasa Poornima as Gurupoornima in the school premises on July 27 as it has been doing since the last several decades. But a WhatsApp picture of the programme has stirred a hornets’ nest in the school locality. Unfortunately, the picture was of a Muslim girl, with headgear, prostrating before her teacher as per the Bharatiya tradition. The anti-Hindutwa forces took it as an excuse to come out to the streets to protest against the school. Their complaint is ridiculously simple: This is Hinduisation, this is against the faith of non-Hindus and what not! DYFI SFI, KSU (Kerala chapter of NSUI), PDP (Abdul Nasar Madani’s party), all staged marched before the school.
The protestors got unholy support from an expected source: The infamous anti-RSS Congress MLA V.T. Balaram wrote in FB that prostrating before one’s teacher and touching his/her feet are akin to revivalism of feudalism and conservatism. For him, teachers do not deserve that much respect because they are paid for the job they do, that is teaching. Teachers and students are expected to cultivate mutual respect, no need of excess respect. This sort of Gurvandan is to create slaves for 56” chest man, an indecent reference to the prime minister of the country.
The same time, leaders of Samastha Kerala Sunni Students Federation (SKSSF), the students wing of Samastha Kerala Jamiyyathul Ulama, a Muslim organisation, visited the school management and discussed the matter. They returned in a cordial atmosphere.
At the end of the day, it is crystal clear that political mileage and communal sentiments raise their heads in CNN school locality. They know that oppose whatever Bharatiya, read Hindu, is the right path to vote bank. They do not mind to cause any amount of damage to the social fabric and country for this petty gain. Balaraman’s FB post is a clear example for this.
School Manager E. Balagopal told this correspondent that the Director of Public Instruction (DPI) had given consent to conduct such programmes. The circular signed by Additional DPI (Academic) Jimmy K. Jose says, such programmes can be conducted with the consent of Parents Teachers Association (PTA) and sans affecting the classes. Balagopal stated that school has been conducting these sorts of programmes since long and so far no objections observed. This time some people have spread the pictures of non-Hindu girls participating in the programme on social media for the sake of creating controversy. He added, Gurupoornima is a spiritual tradition dedicated to teachers, who are seen as enlightened humans ready to share their wisdom.
ShareTweetSendShareShare