RSS does not believe in domination: Dr Mohan Bhagwat. 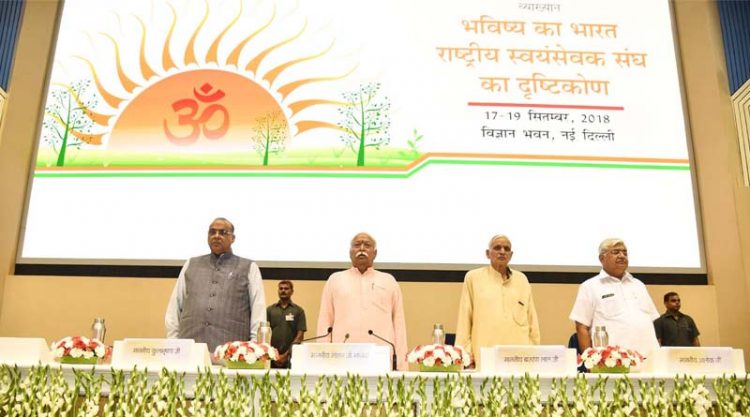 New Delhi, September 17. “The Rashtriya Swayamsevak Sangh does not believe in its own domination, but in strengthening and enabling the society to take the nation forward,” RSS sarsanghchalak Dr Mohan Bhagwat said today while addressing a gathering of prominent personalities on the first day of the three-day lecture series on topic ‘Future of Bharat: An RSS Vision’ at the Vigyan Bhawan.

The program started with a short introduction by well-known economist Dr. Bajranglal Gupt (RSS Sanghchalak, north zone). “People have been wondering at the need and the timing of this event,” he began. “The Sangh work basically comprises of communicating with people from different walks of life, and we regularly organize such events, small and big, across the nation. This is just the first time that the Sarsanghchalak is addressing such a galaxy of prominent personalities here.”

“As for the timing of the event, question would have cropped up at any other time also. We have to understand that the Sarsanghchalak’s calendar of events is decided a year in advance. Even I was thinking it would have been more convenient to invite people on weekend dates. But since Dr Bhagwat was only available on these dates (17, 18 and 19), this event was planned accordingly,” Dr Bajranglal explained.

“There is immense curiosity among the people as to the working and objectives of the RSS. This lecture series has been organized in an effort to satisfy all questions in the public mind regarding Sangh’s working and views. The Sarshanghchalak is our designated head, hence Dr Mohan Bhagwat will present the Sangh’s way of working and its views. He will also answer all questions emanating from the audience on the third day,” he said.

Dr Mohan Bhagwat began his address by saying that the Sangh’s work is so unique that comparing it with any other organization is not possible. “I will explain the working of the Sangh. My intention is not

to convince you. Your judgement is your own prerogative. If you want to check out the facts that I give you, you must come closer to the Sangh and check for yourself,” he said.

“To understand the Sangh, one must understand who its founder Dr Keshav Baliram Hedgewar was,” Dr Bhagwat said and went on to relate the life and experiences that shaped Dr. Hedgewar. He related various anecdotes about Dr Hedgewar’s life, his participation in the independence struggle and how he became convinced about the imperative need to train the people to create a strong and united society.

He quoted many leaders and thinkers such as Rabindranath Tagore, communist thinker MN Roy, former President Dr Abdul Kalam who came to believe that the society needs to be awakened to realize the strengths of its traditional values. Dr Hedgewar, he said, interacted copiously with different ideologists and came to believe that all ideologies must come together to form a strong nation.

He felt the need to train people to work towards positively transforming the society and the nation.

“It was with this objective that he announced the formation of the Sangh on Vijayadashmi day in 1925,” he said.

“RSS is a methodology. It’s only work is “vyakti nirman” (making good human beings). There should be good swayamsevaks in every village and mohalla,” Dr Bhagwat said..

“Dr Hedgewar said the Sangh would work towards uniting the entire Hindu society – nothing else. So much diversity in languages, cultures, religious practices, food habits etc. How to take everybody along? The traditional value system that has the strength to connect and unite everyone in Hindusthan is Hinduness (Hindutva). There is no other word that can describe this unifying factor across Bharat,” Dr Bhagwat said.

“RSS is the methodology of bring all these diversities together. We have to be a deserving society,” he said.

“Since generations Bharatiya society has traditionally taught us how to live together. Whenever we have forgotten our own values, we have suffered,” he said. “Desh ka patan hamare patan se hua hai,” he said.

“People get the impression that RSS is a very dictatorial organization. They think that the ‘chief’ of RSS decides everything and everyone has to follow. In reality, RSS is very different. If you want to see the largest democratic organization in the world, you have to see and understand the RSS. But don’t believe me, come close to Sangh to check out the truth,” he said.

“Every swayamsevak has the right to question, share his thoughts and there is a system how swayamsevaks’ thoughts are taken into consideration at each level, till the Pratinidhi Sabha (the highest decision making body of the Sangh).”

“Sangh is a self-sustaining organization. We organize all funds for our activities and do not take even a penny from any other organization. Swayamsevaks look at the saffron flag as their ‘guru’ and an annual exercise of ‘gurudakshina’ raises funds for the yearlong activities of the RSS,” Dr Bhagwat explained.

“Various social service projects are run by swayamsevaks – funds for these projects are take from outside through various organisations runs as per rules and laws of the nation.”

“We do not want Sangh domination. Our viewpoint is quite the opposite actually. Our vision is to strengthen the society, which will take the nation forward. Community feeling is the basis of Sangh ideology. Our swayamsevaks do a lot of good work, but we do not propagate their names. Every citizen must work for the nation selflessly, because it is the duty of all of us to give back to the nation in whatever way possible.”

“Our objective is simply to motivate and train every swayamsevak to bring about a positive change in the society,” he said.

On the question of women participation in the RSS, Dr Bhagwat made it clear that Rashtra Sevika Samiti works on the same lines as the Sangh and women participate in a big way in all social service projects run by swayamsevaks. “Most of our swayamsevaks are family men, and their families’ contribution is vital,” he said.