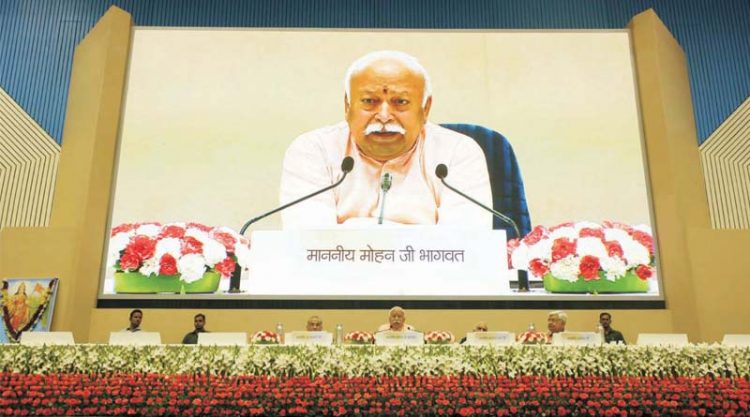 New Delhi, September 19 : Rashtriya Swayamsevak Sangh Sarsanghchalak Dr Mohan Bhagwat today cleared the air about a number of issues of national importance which came up in the form of queries during the three-day lecture series on topic ‘Future of Bharat: An RSS Vision’ at the Vigyan Bhawan. Ending the lecture series with a call to the society to come together to work for the nation, Dr Bhagwat reiterated that the RSS solely works with aim of training people to be responsible citizens of Bharat. Swayamsevaks take up various social and national projects.

He also called upon all communities to come close to the Sangh to understand its working. “You need not believe all that I have said during the last three days. But I believe firmly that once you understand the Sangh, you will want to be a part of it,” he said.

His views on different topics are as follows:

“We support reservation as the Constitution of India provides for it. Reservation should stay till those communities who get the benefits of reservation themselves decide that they no longer need it.

“The Sangh supports inter-caste marriages, which should become a process for promoting homogeneity in the society. In fact you will find the best percentage of intercaste marriages among swayamsevaks across Bharat.”

“One cannot deny that victimization exists in our society. Laws to secure people against victimization should be made and implemented properly. But we must also ensure that laws are not exploited and misused – something which is being unfortunately happening today.”

The building of Ram mandir will end a major issue of friction between Hindus and Muslims. And if it is done amicably, it will automatically silence those who point fingers at the Muslim community.”

“In any democratic system, it is not possible to get a 100 per cent perfect option. The best available option has to be chosen. It is human nature and it has been so since the time of Mahabharat. When the Yadavs were discussing who they should choose between Kauravas and Pandavas, the opinion was divided between both sides. The Pandavas too had made many mistakes, it was pointed out. At this point Shri Krishna guided that perfection is not possible, hence the best available option has to be selected. That holds true even today.

“A comprehensive and balanced policy should be made on the issue of population. The policy makers must envision the next 50 years and plan accordingly. The policy, once it is made, should be applicable to all communities. And wherever the situation is more complicated, it should be implemented on a priority basis.”

“Environment and pollution are important national issues and every community needs to think and act responsibly during their festivals. This should apply across all communities. But why are only Hindu festivals being selectively targeted in the name of pollution? Hindu traditions have always evolved according to times and we should be ready to change systems that are harming the environment. This should apply to everyone.”

“Since everyone says all religions are the same, what is the need for conversion? Those who promote conversion are not promoting spirituality. Their objectives are sinister. My personal beliefs should be my own prerogative.  Religion cannot be sold in the market. We respect those who move into another religion out of their own conviction. But all of us know how conversions are done. If money exchanges hands to force conversions, we will speak against it.”