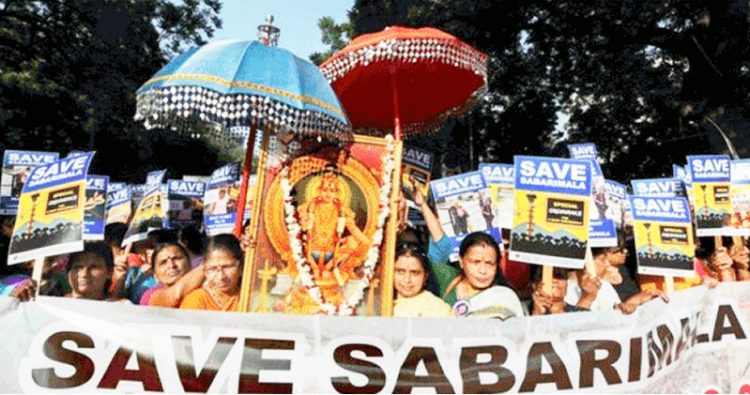 ShareTweetSendTelegram
The Sabarimala verdict is received with sharp reactions. To some extent, it was expected, but the women for whose entry this entire case was fought for years would come out in numbers in the name of ‘Save Sabarimala’ campaign. Generally, Hindu sects are very flexible when it comes to their customs and rituals, but this verdict has opened up many questions about the uniqueness of temple traditions and their sanctity in many ways. We will have to address those questions as a society by taking everyone together
The Supreme Court verdict of September 28 against the tradition of the women, between the age of 10 and 50, from entering Sabarimala Temple has paved the way for heated arguments in the State of Kerala.

There were three judgements, the first one by former CJI Dipak Misra and Justice Khanwilkar, the second and third by Justice Rohinton Fali Nariman and Justice DY Chandrachud respectively. These three judgements were for lifting the ban. Justice Indu Malhotra, the only woman judge on the five judges Constitution Bench, delivered a dissenting judgement. The majority of judgements were against the inequality based on gender.
The lifting of the ban has stirred a hornets’ nest in Kerala, the seat of Sabarimala. Hindu women by and large are against the verdict. They say, they believe in the tradition of keeping away from the temple between the age of 10 and 50 and they are ready to wait and no question of violating the tradition.
Hindus in Dissent Mode
Kerala witnessed massive rallies on October 2 supporting centuries-old tradition. Interestingly, the participation of women in the rallies was incredible, beyond imagination. More than ten thousand women participated in the rally in Pandalam, the place of the Pandalam royal family, the major place linked with the legend of Lord Ayyappa, the presiding deity of Sabarimala. At several places, traffic on the highways was obstructed for several hours, thanks to the massive rallies. Significantly none of them was organised by any mainstream Hindu bodies. All were spontaneous congregations.