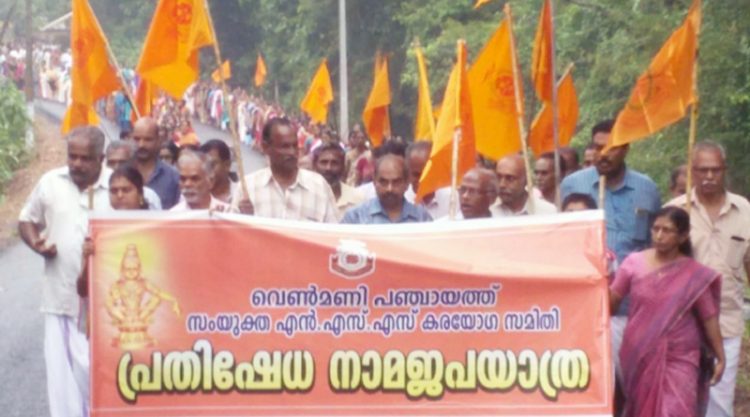 ShareTweetSendTelegram
Irked by the upper hand gained by devotees over the state government in Sabarimala, a group of CPM goons attacked a Hindu temple and devotees in Venmoney, Chengannur on Wednesday night. More than 100 goons belonging to CPM youth wing DYFI unleashed a brutal attack on Sri Bhuvaneswari at Kalyathra, run by the Nair Service Society (NSS), the organisation of Nair community that leads the Sabarimala protests across Kerala. The goons trespassed into the temple premise, hurled soda and beer bottles and stones at the temple and destroyed statues and hundi box. They also brutally assaulted four devotees and hacked them with lethal weapons, leaving one in critical condition with severe head injuries. The devotees were standing inside the temple during the attack.
Condemning the Communist attack on Hindu temple and devotees, Senior RSS leader and Prajna Pravah national convener Shri J Nandakumar said that the incident shows sheer intolerance of CPM towards the Hindus who peacefully protest against the state government over Sabarimala issue. He also sought a public apology from the CPM leadership over series of brutal attacks on Hindu organisations perpetrated by its cadres at the behest of the state government. The incident was the last in a series of attacks on institutions and properties owned by NSS. In another incident took place in Kadambanad, Pathanamthitta district, CPM goons destroyed a flag post and placed a wreath in the name of NSS General Secretary Sukumaran Nair for supporting the Sabarimala protests. Despite threats and widespread attacks, the NSS did not change its stance on the issue.
Speaking to Organiser, Anoop Murali who suffered injuries in the attack, said that the attack was premeditated and the assailants were carrying lethal weapons like sword and iron rods. Cases have been registered against Jebin Varghese, Siby Abraham, Shifin Ravuthar, etc. who are accused in several criminal cases. Jebin Varghese is CPM Alappuzha Zilla Panchayat member.
The NSS had called for a hartal today. BJP and Congress leaders condemned the attack on the temple. Leaders of the NSS also condemned the attack. A large number of devotees, majority of them women, took out a huge protest against the attack.
ShareTweetSendShareShare