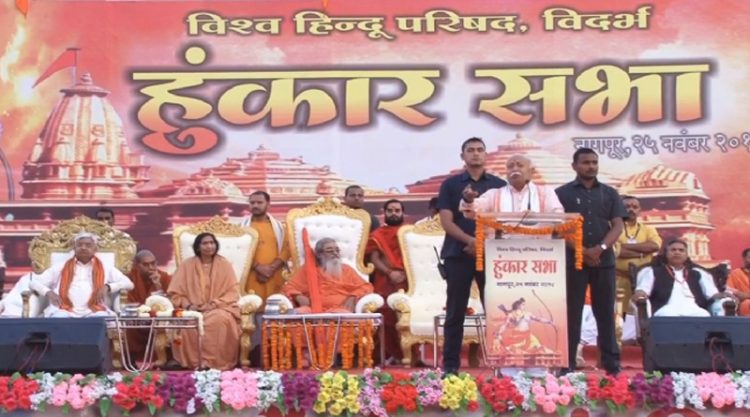 The saints including president of Shri Ramjanmabhoomi Trust Mahant Nrityagopal Das, Swami Ramanandacharya Swami Rambhadracharya, Swami Hansdevacharya, Shankaracharya Swami Vasudevacharya Saraswati, Yugpurush Swami Parmanand Maharaj and scores of leaders from various organisations clearly said that division of Shri Ramjanmabhoomi is unacceptable and they would not accept anything but the Temple in Ayodhya.
RSS Sarsanghachalak Shri Mohan Bhagwat, while addressing the Dharma Sabha in Nagpur, reiterated the demand of enacting a law to pave the way for reconstruction of Shri Ram Temple. He said the Hindu society is waiting for centuries and now they want no more delay. Shri Mohan Bhagwat further said that it has historically been proved that the temple was there and now the apex court should give priority to the case. “Justice delayed is justice denied,” he added.
International working president of VHP and a senior advocate Shri Alok Kumar came down heavily on those who question the enactment of a law in Parliament for the temple saying that there is no hurdle in making a law even though the matter is subjudice. He said in a democracy, the powers of enacting any law in public interests are endless. Therefore, any delay in this regard would cause further pain to the Hindu society.
Didi Maa Sadhvi Ritambhara said the Hindus are feeling cheated since the day the Supreme Court postponed the hearing in Shri Ram Janmabhoomi case for three months without hearing the petitioners even for three minutes and also without constituting a bench for it. Now the people have hopes only from the Parliament and the Rambhakta government. Swami Jitendranand Saraswati said Shri Ramjanmabhoomi could not be shifted. He said the court must respect the sentiments of the countrymen. Presiding over the Hunkar Sabha Shankaracharya Swami Vasudevanand Saraswati said any delay in reconstruction of the temple is intolerable.
In Ayodhya, the Vishwa Hindu Parishad vice president Shri Champat Rai said the delay in this matter is giving wrong signals. He categorically said: “The formula of dividing the land is unacceptable. We want total area of the land”. He declared that now the temple movement would continue until the reconstruction of the Temple begins. He said the Sunni Wakf Board must withdraw its claim from the court. President of Shri Ramjanmabhoomi Trust Mahant Nritya Gopal appealed to the Chief Minister Yogi Aditya Nath to come forward and pave the way for temple reconstruction.
In Hubli, Mahamandaleshwar Swami Akhileshwaranand Giri Maharaj, Swami Basavlinga Mahaswami, Pujya Shri Shri Siddha Shivyogi Maharaj, Jain Muni Jyotishacharya Dr Hemchandra Surishwar Maharaj and VHP leaders reiterated the demand for enactment of a law in Parliament for reconstruction of the temple. In Mangaluru, the Dharma Sabha was addressed by Pujya Virendra Hegade and national convener of VHP Shri Sohan Singh Solanki.
ShareTweetSendShareShare