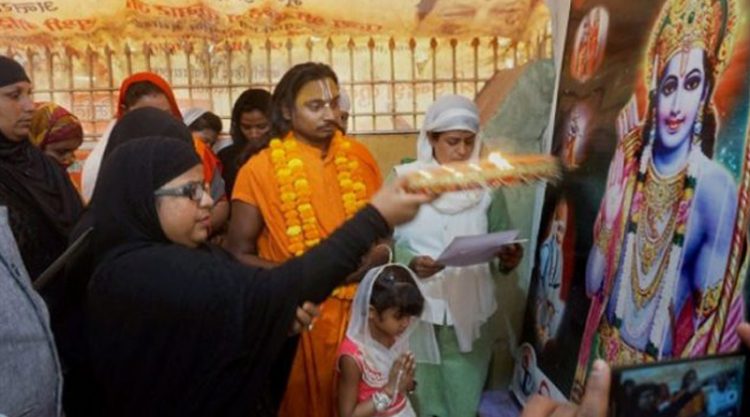 As the clamour for building Ram temple at Ayodhya is reaching pinnacle, it is gradually getting the support from unexpected quarters. Recently Muslim women in Meerut extended their support to the construction of Ram temple in Ayodhya.

According to the report of Amar Ujala, on the occasion of a religious meeting (Istma) organised under the banner of Muslim National Forum hosted by co-convener Shahin  Parvez, the Muslim women took the oath to facilitate the construction of Ram temple at Ayodhya.

While addressing the meeting, Shahin Parvez said that it is our duty to support the construction of Ram temple for the happiness of our Hindu brothers and sisters.

The Executive member of Rashtritya Ekta Mission, Subuhi Khan, said while addressing the meeting that Ram temple is the symbol of our ancient sanatan culture and our loyalty lies with our culture and not with foreign invaders. She said that we want a temple in Ayodhya and not a mosque and that we would face the obstacles that will come in the way of construction of the temple together.

Pledging the support, the Muslim women reportedly echoed that ‘kasam Khuda ki khaate hai, mandir wahin banayenge’. We swear on Khuda that we will ensure temple is constructed there (Ayodhya).

They added that Muslims have nothing to do with Babri Masjid and that Babar even enslaved Indian Muslims.

This is not the first time Muslim women have extended support to construction of Ram Mandir in Ayodhya. Earlier in the month of March, a conference was organized at Ayodhya by the Muslim National Forum to find an amicable to solution to the Ayodhya dispute. A Muslim group called Muslim Karsevak Sangh (MKS) had also extended its support for the construction of Ram Temple at the centuries-old disputed site at Ayodhya. Shia Wakf Board showed support in the favour of construction of Ram temple. The Board told the Supreme Court that it is willing to relinquish their one-third share in the disputed land the Allahabad High Court had granted to Muslim petitioners so that they can build a Ram temple.