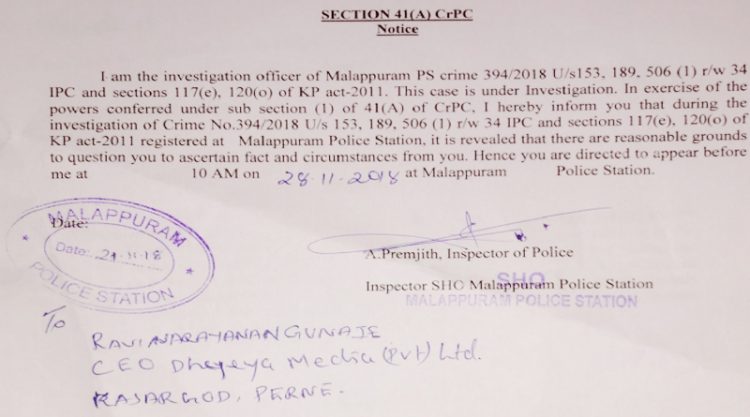 ShareTweetSendTelegram
Ever since the Sabarimala movement started to retain the traditions of the divine shrine, the Kerala police have been using every tool at their disposal to threaten, abuse and hurt devotees who are in their way. Kerala police have been accused of working more like an arm of CM Pinarayi’s party than as a pillar to uphold democracy. It is the inhuman acts of the Kerala police that has turned Kerala into a battlefield by targeting anyone who stood for tradition and was keen to follow them. But now, it seems the Kerala police were not satisfied by targeting devotees on the ground, that they are not targeting devotees and supporters of Swami Ayyappa online even for expressing their displeasure.
Hundreds of social media users have received notices from the Kerala police asking explanations for their tweets and posts decrying the Kerala government and the use of excessive force and intimidation by the Kerala police. Even users outside Kerala have been sent notices. Organiser spoke to a couple of social media users who have received such notices.

Suresh N, a techie and qualified in criminal law, has received notice from Malappuram police station via WhatsApp which says that there are reasonable grounds to question him in regard to an FIR filed under IPC sections 153, 189, 506 (1) and KP act-2001 sections 117(e) and 120(o). “I have not received an FIR and the notice was sent on WhatsApp. I think this is intimidation tactics by Kerala police. I have an inkling that this was because I questioned the conduct of an IPS officer who was deputed to control the devotees.” IPC 153 is about promoting enmity between different groups on various grounds, 189 is about Threat of injury to public servant and 506(1) is about criminal intimidation. Suresh rejects the charges saying that his tweets portray none of these intentions and anyone can see them as it is still there.

Suresh on 19th November 19, in a tweet, had narrated the way IPS officer Pratheesh Kumar ripped opened Rudrakshi Mala and stepped over the Irumudi (offerings to Ayyappa). In a subsequent tweet, Suresh had pointed to the lack of understanding of the concerned officer about the local tradition. “My intention was to highlight that his acts was due to his ignorance of the local tradition and I was in fact questioning the authorities who deputed him at such a sensitive place at this charged moment”, says Suresh, stressing that it was this tweet which attracted the police to send the notices. The attitude of the said officer and other police personnel was also corroborated and pointed out by other devotees too on social media.

“Visiting Sabarimala is the right of the devotees and police have to facilitate smooth darshan and not create hiccups for them. As a student of law, I can say for sure that questioning the attitude of the police is not an offence. Whatever may be the case, we are determined to Save Sabarimala tradition”, says Suresh who is also instrumental in starting Ayyappa Namajapa campaign in Bengaluru.

Threatening social media users using political power has been done earlier too, as in the instance of Karti Chidambaram filing a case and getting a Twitter user arrested for questioning him. But such large-scale action by a state’s police to hunt down anyone who questions the government or the police is unprecedented in India’s history.

Observers say that the Kerala police is doing this at the behest of the CPM who are losing their political ground every day due to their misadventure in Kerala. Targeting its political opponents has been the old strategy of CPM and its just that it has moved online by using the police force.