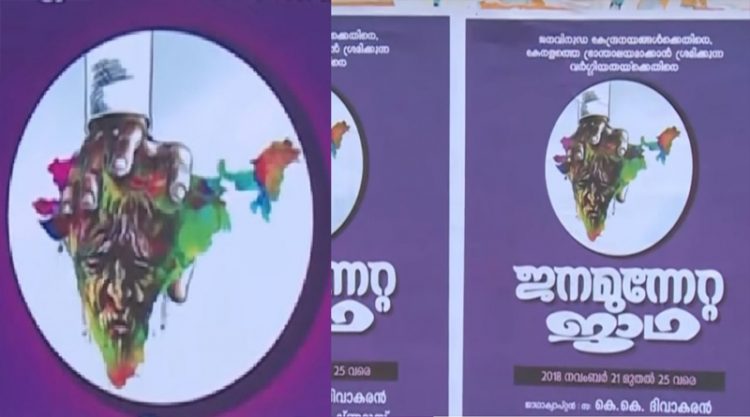 Undivided CPI has been saying NO to the national integrity. Bharat is not a nation for them, but a conglomerate of several nationalities created by Britons. Even after party split into two parties in 1964, both CPI and CPM have been following the same mindset. Now, Palakkad in Kerala witnesses the latest proof of the antinationalist and distorted mind set of them. The posters CPM has pasted throughout Palakkad is of a defiled map of Bharat sans Jammu Kashmir. The posters are in connection with the “Janamunnetta yatra” (People’s Movement Yatra) launched by CPM to propagate the party’s Sabarimala policy. It is again the violation of high court order banning the installation of hoardings and flex boards along highways. CPM has been doing this violation since the moment high court issued the order.

BJP district president Krishnadas told the media that his party would go ahead with legal actions against CPM in this regard.

Meanwhile in China, the state-run television CGTN has displayed Pakistan Occupied Jammu and Kashmir as part of original map of Jammu and Kashmir which has been a long standing demand by India for decades. The map was displayed while reporting the terror attack on Chinese consulate last Friday. However, it is not yet known whether this was a calculated move by the Chinese government or not. It has been expected that the incident may draw reaction from Islamabad and the Pakistan Army.