Facing the problem with courage is the first lesson of the Geeta – Dr. Mohan Ji Bhagwat 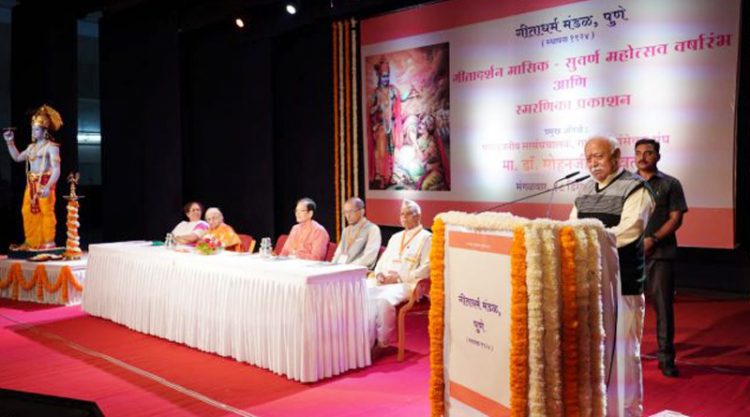 Pune (VSK): Not turning back on the problem when it comes up and to face it with courage is the first lesson of Bhagvad Geeta. Even though Geeta may sound unintelligible, but it has to reach to masses. If Bhagvad Geeta reaches to every home and we practice it in true spirit, then India can emerge as Vishwa Guru a hundred times more than today, said Rashtriya Swayamsevak Sangh’s Sarsanghchalak Mohan Bhagwat Ji on Tuesday (December 18,2018).

Sarsanghchalak Ji said, “Bhagvad Geeta provides the direction of how an Indian should spend his or her life. Therefore, the study and practice of Geeta becomes very important. It is necessary to take Bhagvad Geeta to everyone. India has to tread on the path of Geeta to emerge as a nation in true sense. This is not a task of any individual, organization or a political party, but of the entire society. When the society will practice Geeta in true sense, then only our ideal nation will emerge.”

He said, “The first lesson of the Geeta is not  to turn one’s back when one is faced with duty. That is why Bhagvad Geeta says that one should not run away from problem but a way can be found out as one thinks on the problem. The confusion that Arjun found himself in was not because of cowardice but because of conscience. The virtuous people think in the interests of the society, which is why such problems often arise for them. On the contrary, the wicked only look at their selfish goals and immediate gains which is why they do not face such predicaments. And that is why they do whatever they want. The provocative people get famous easily as well.

However, our forefathers thought about looking inside while chasing the carnal pleasures and this soul-searching was taken to perfection only in India. When this truth was taken to all the people, it was known as the Hindu or Arya civilization. You may use any other word if you are averse to a particular word, but the thing will remain same. Those who complete this exploration are not affected by sadness. The one who stands on the foundation of truth is not perplexed by death.

Mohan Ji said that Geeta teaches the path of sacrifice and endurance as also the virtuous happiness instead of consumerism. The essence of all the ideologies prior to and after Mahabharata is found in the Geeta. Not only this, it reflects even the beliefs of other sects, even if their way of worship are different. This is the power of the Geeta. We call the dharma as taught by Geeta as Geeta Dharma. But it is actually the universal dharma and eternal, sanatana dharma. It is continuing since the origin of the world and has continued to this day. The world’s status, movement and rhythm are in accordance with it.

He said that one should read Adhyay 2, 12, 15, 16, 17 and 18 of the Geeta every day and ponder over them. The Geeta is not a sadhana to be done by any one person. Another important teaching of Geeta is that whatever we do should be for the larger well-being of people.

Explaining the word dharma, Sarsanghchalak ji said that dharma means balanced conduct. One should not abandon dharma even to protect one’s life. One who lives for the dharma lives for the nation.

The right time has to come

He said, a person or an organization may work diligently but the right time has to come to get its results. RSS was banned during the Emergency and we would do satyagraha at the time. We used to ask questions to our senior pracharak Nana Mule why such a time befell on good people and organizations and did the god not see all this? He used to say, do not give up the efforts. We did not even dream that days such as today would come for the RSS. Even if someone had told us, we would have ridiculed him.

Saying that what someone achieves has a contribution of many behind it. Even our habits are also imbibed in us by others, He said, “What is the use of the ego thinking what I do is good, I have done this or that? Bhagvad Geeta says that we should do our work, not expecting the fruits. What is to be done should be done by immersing oneself in it but one should not get attached with it. We tell to RSS workers, do whatever by becoming one with the work, but don’t get involved in it. That is the reason our workers do anything naturally.

The working president of the Geeta Dharma Mandal Prof. Dr. Mukund Datar said, “Geeta Dharma or the dharma extolled in Geeta is the national dharma of India. Geeta has provided the key of Nishkam Karma Yoga. Geeta gives a person the devotion of divine and betterment to the society.”

The editor of monthly Geeta Darshan Vinaya Mehendale described the journey of the magazine. On this occasion, a souvenir issues published by Geeta Dharam Mandal was released by Mohan Bhagwat. Also, Smt. Vasudhatai Palande was honored with the Saraswati Bai Apte Award for the work for the spread of Bhagvad Geeta.