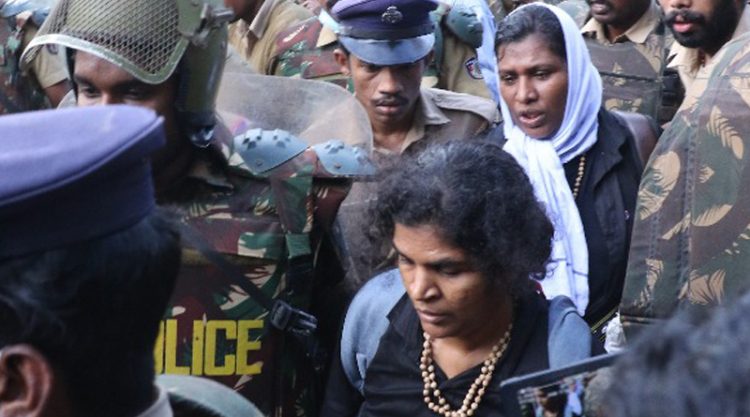 A day after 11 activists belonging to Chennai-based ‘Manithi’ (NGO) failed to enter the Lord Ayyappa shrine at Sabarimala, two more women in their forties were turned back without being able to enter the shrine on Monday (24 Dec.) The attempt by two women, came a day after a group of 11 women activists of ‘Manithi’, a Chennai-based outfit, unsuccessfully tried to reach the shrine.

Steadfast protests by the devotees at Apachimedu and Marakootam, about 1 km of the ‘Sannidhanam’ (temple complex), led to the two women, namely Bindu and Kanakdurga, to return. According to the report, the two women reached Pamba at around 4 am and were being escorted by the Kerala police.

The devotees gathered in large numbers to protest the entry and a minor altercation between police and devotees has also been reported. The cops tried to evict the pilgrims shouting “go back” and chanting Ayyappa mantras.

The police, seeing the growing number of protesters including young children, advised the women to return.

There have been several attempts made by ‘activists’ to enter the Sabarimala sanctum since the 28 September Supreme Court verdict that set aside the centuries old tradition of restricting women belonging to the age group between 10 and 50. However, no women in the age group 10 to 50 has entered the temple despite the Pinarayi Vijayan-led Kerala government using massive police force to implement the verdict.