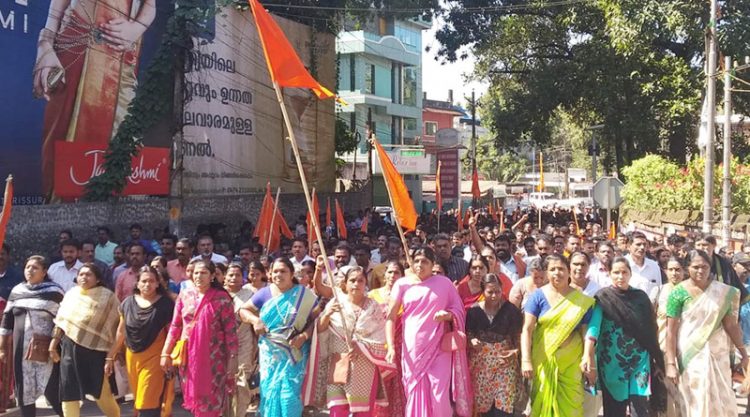 03-01-2019 :The dawn-to-dusk hartal called by Sabarimala Karma Samithi against the entry of two women of menstruating age, has hit life across Kerala, with violence being reported from many places. Normal life has been crippled. KSRTC buses and autos were attacked in many places. The offices of the CPM and BJP were attacked. Many protestors were taken into custody in Idukki and Ernakulam.

An activist of Sabarimala Karma Samithi attending a protest march at Pandalam died last evening after stones were pelted from the CPM office. After post-mortem, the body of Chandran Unnithan will be taken to Pandalam. A tense situation is prevailing here. Five houses of CPM activists were attacked in Pandalam. BJP activist was stabbed in Meeppagiri, Kasargod He has been identified as Ganesh, native of Paarakkattu.Meantime, three BJP activists were stabbed in Vadanappalli in Thrissur. BJP activists Sujith, Sreejith and Ratheesh were stabbed during a clash with SDPI. They are severely injured and admitted to a hospital. BJP leadership alleged that SDPI is behind the attack.

Widespread violence was reported from many parts of the state. The media was attacked in the capital city during a march staged by BJP activists. In protest over the incident, they stopped reporting BJP programmes. However in some places hotels and shops were opened. Only some emergency services and private vehicles are seen on roads. A bomb was hurled in front of Nedumangad police station. Bomb was hurdled thrice seeking the release of three accused taken into custody. Widespread attacks were witnessed towards the houses of CPM activists.

Protestors owing allegiance to the hartal unleashed violence at the offices of the CPM and the CPI. Five bikes and two cars parked in front of the CPI office in Palakkad were damaged. The window panes of the office were also smashed. The attack was witnessed when the activists who gathered near the Victoria College were about to disperse after staging a march. Stones were pelted by the CPM and the Karma Samithi activists. The police had to fire tear gas four times to disperse the protestors.

CPM offices were attacked at Thavanoor in Malappuram and Ernakulam. EMS library in Palakkad was set on fire. CPM office at Pullad in Pathanamthitta was attacked. A BJP office at Neeleswaram in Kasargod was also attacked.Transportation was disrupted by laying stones on the road and burning tyres at Kundamangalam and Paroppadiyil in Kozhikode. Stones were pelted at the vehicle of the circle inspector in Koyilandy. Roads were blocked by placing logs on the road at Pathanapuam in Kollam. Transportation was disrupted by burning tyres in Kottarakkara.

BJP activists forced closure of shops in Erumeli. KSRTC buses are not plying in Palakkad and Thrissur. The KSRTC bus from Bengaluru are continuing service to Kottayam and Munnar with police protection. There are no KSRTC services to other places.Stones were pelted at a KSRTC bus in Payyannur and Perumba in Kannur. All KSRTC services in Kannur were stopped following the incident. Protestors also damaged some autos in Kannur.

Only a few KSRTC buses are plying from Kottayam railway station to Pampa. Many are stranded in the station. The KSRTC are operatizing service only to Pampa. Services of KSRTC have been stopped completely at Pappanmcode and Neyyatinkara in the capital city after stones were pelted.The passengers had a tough time after services from other states to Kerala were stopped. Following the hartal, the house of Vyapari Vyavasayi Ekopana Samithi chief T Nazeerudin was given police protection. Police protection was given after he announced the opening of shops. Meantime he told reporters that they are not getting enough support or help from police to defeat the hartal. They are also getting threats from protestors.

The standoff on Sabarimala showed no signs of ending even as Hindu outfits called for a state-wide shutdown on Thursday, amid protests at several places after entry of two women into the Lord Ayyappa temple at Sabarimala. The 12-hour hartal, which began at 6 am, has been called by Sabarimala Karma Samithi, an umbrella organisation of various pro-Hindutva groups, spearheading protests against the Supreme Court’s September 28 verdict, The BJP is supporting the shutdown while the Congress-led UDF is observing a “black day” on Thursday.