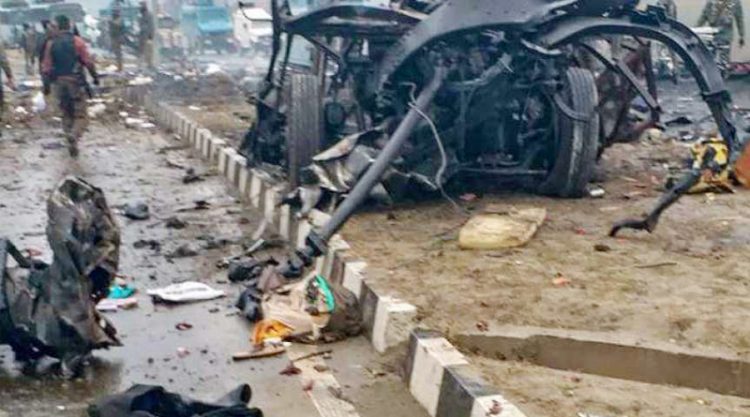 Srinagar: In an Islamic terror attack in Awantipora, Pulwama, Jammu and Kashmir, at least 23 CRPF jawans lost their lives on Thursday evening, various news agencies reported. This is the biggest terror attack in the state in recent memory.

According to reports two buses in the Central Reserve Police Force convoy were hit in the high-intensity IED blast. Dozens of people were also injured in the attack. The death toll is expected to rise. The terrorists targeted a convoy of CRPF which had around 70 vehicles and nearly 2500 personnel, and was on its way from Jammu to Srinagar.

Zulfiqar Hassan, IG, CRPF (Operations) said, “J&K Police has taken up the investigation. The injured have been shifted to a hospital. Post-blast analysis being done at the spot.”

CRPF DG, RR Bhatnagar said, “Senior officers are at the spot, investigation is underway. Injured are being taken care of. There were 2500 personnel in the convoy.”

Meanwhile, Home Minister Rajnath Singh has spoken the CRPF DG to review the situation. National Security Advisor Ajit Doval is monitoring the situation in Kashmir post and senior CRPF officials are briefing him on the situation.

Condemning the attack, Union Minister Arun Jaitley said, “Attack on CRPF in Pulwama, J&K is cowardice and condemnable act of terrorists. Nation salutes martyrs & we stand united with families of martyrs. We pray for speedy recovery of the injured. Terrorists will be given unforgettable lesson for their heinous act.”