No Devaswom Model for Christians: Kerala Govt succumbs to protests from Christian groups, puts the Church Bill on back-burner. 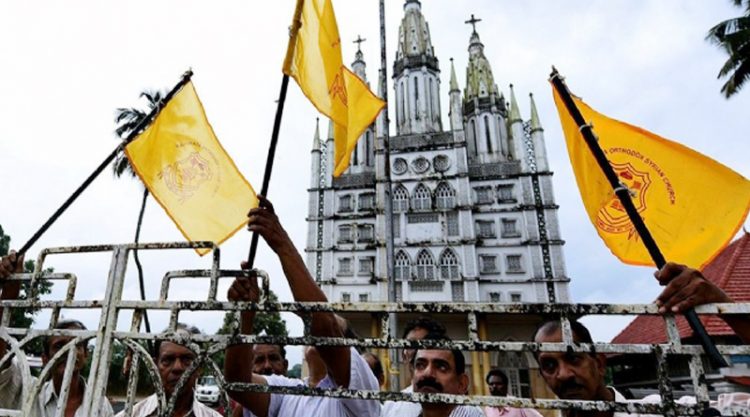 ShareTweetSendTelegram
While the ruling CPM is leaving no stones unturned in tampering with Hindu traditions and temple affairs, Kerala chief Minister Vijayan assured the Church that it will not pursue the Draft Kerala Church (Properties and Institutions) Bill 2019, which was drafted by the Kerala Law Reforms Commission to ensure fair and transparent administration of the properties and funds of the churches in Kerala.
“The CM has assured us the government has no intention to bring the Church Act. The CM also said the commission has not consulted the government before formulating the bill,” Cardinal Mar Baselios Cleemis told media persons after meeting the CM at his office.
The state government has declared its withdrawal from implementing the draft Church Bill after succumbing to the pressure and protests from various Christian churches. Various churches came up against the proposal alleging that the government is attempting to take over the administration of churches on similar lines of the Travancore Cochin Hindu Religious Institutions Act. The bill was drafted by the Kerala Law Reforms Commission, headed by Justice (retd) KT Thomas.
CPM state secretary Balakrishnan said the government has no plan to go ahead with the Bill. “There are civil as well as Church rules in place already. Some vested interests are trying to spread rumours with a political aim. The LDF government had already made its stand clear,” Balakrishnan told reporters.
At present, there is no law on the administration of the properties of Christian churches. The draft bill reportedly says that the Churches have a large amount of properties and assets, acquired through various sources, and these are managed by church heads or bishops. It states that there are instances when these properties are alienated without consultation at proper forums, resulting in financial losses, which affect the morale of devotees. In the recent past, there are property related tussles and legal battles among various churches in the state.
As per the draft Bill, the government can form a tribunal headed by a district judge, where any church member can file a petition related to the administration of church properties or mismanagement of funds. And the accounts of every church denomination will be subjected to annual audit by a qualified chartered accountant (CA), or a team of CAs selected by the denomination concerned.
Varghese Vallikkattu, deputy secretary-general of Kerala Catholic Bishops Council, slammed the draft law and said it is an attempt to tarnish the Church’s image in public eye. “No one has demanded the formation of a tribunal. What the Law Reforms Commission has stated is only the voice of disgruntled elements in Church. The Constitution has given the (Church) right to manage assets. The suggestions in the Bill are anti-Constitutional. If they are implemented, management of church properties will go to atheists. We are strongly opposed to the Bill,’’ he told to Indian Express.
The Church opposes the formation of a tribunal because the leaders of different Churches will have to present accounts before a judicial organisation. George Joseph, chairman of All-Kerala Church Action Council, a reformist outfit, while speaking to the Indian Express, said churches are afraid of getting their accounts audited and presented before a competent authority for review.
“Bishops are afraid of transparency in managing church funds, therefore this protest. The suggestions in the Bill should be implemented — it is the need of the hour,’’ Joseph added.
Speaking to News 18, Advocate Indulekha Joseph, vice-chairperson of the action council, said, “The bill speaks about transparency and fairness in the administration of the properties and funds of churches in Kerala, but fails to address the issues as to whom the property is vested or by whom it is to be administered. There should be a committee at the parish and diocese-level with elected representatives along with priests and they should manage the properties.”
The left Government in Kerala had rejected a similar proposal when it came up during the 2006-2011 period.
ShareTweetSendShareShare