CPM & Congress resort to violence against BJP candidates in kerala. 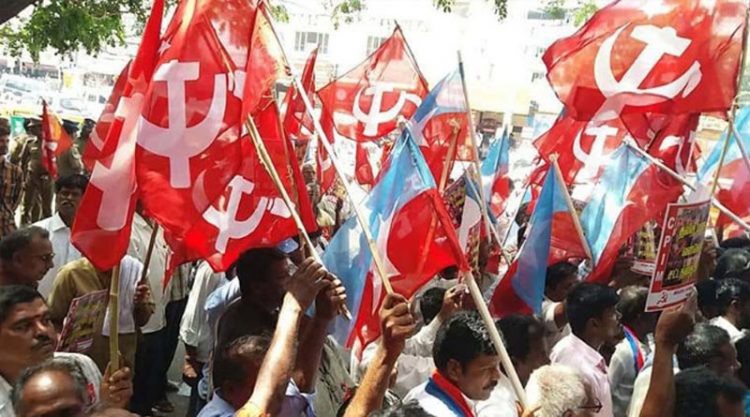 CPM and Congress have again resorted to violence and verbal abuse against BJP candidates in Kerala. There were two attacks against the convoy of vehicles belonging to the election campaign of Ms Shobha Surendran, NDA candidate and national executive member of BJP. The first attack was at Pallikkavil, Varkkala in Tiruvananathapuram district. The convoy was stopped by CPM goons led by their local leaders. They threatened Shobha Surendran and stopped her from delivering her speech. The police who arrived at the spot after 45 minutes, remained as mute spectators. BJP state committee member Alangkodd Danasheelan was injured in the attack.

It was evident that the CPM goons were getting the support of Congress-led UDF. At last when the convoy moved to the next place Mootala, it was the goons of Congress and UDF who took over the fascist attack. On both occasions the attackers showered the candidate with filthy abuses. By the time the BJP campaign party was able to avoid the attack and move on, the EC’s deadline for using public address system was over. Shobhaji and her colleagues went ahead with a campaign and public speeches without the use of loud speakers.
K. Surendran’s campaign was also attacked and stopped. In this attack, both CPM and Congress leaders were hand-in-glove. They tried to provoke the BJP workers and get them arrested so that the election campaign would be adversely affected. During the wee hours of April 15, an election committee office of Suresh Gopi MP (RS), BJP/NDA candidate in Thrissur constituency was vandalized.

The state official machinery has almost been working as a group committed to create impediments for the NDA candidates. In Tiruvananthapuram, the office of the district collector removed the posters of the apolitical Shabarimala Karma Samiti. Since the LDF and CPM leaders are aware of the people’s wrath against their anti-Shabarimala actions against the devotees, they are now using the bureaucracy to stop the Hindu votes from going in NDA’s favour. Hence they have resorted to removing the Samiti’s posters. VHP and Hindu Aikyavedi workers are protesting in the capital city against the anti-Hindutwa acts of the collector. It has also come to light that an election officer himself removed the BJP posters in Attingal constituency.
CPM-Congress nexus to stop NDA candidates is very clear in Kerala now. Rahul Gandhi who addressed a public meeting in Kerala on April 16, did not utter a single word against CPM. While addressing the media after filing his nomination in Wayanad during the first week of April, he said that ‘they would not get a single word from him against CPM’.
CPM workers congregated in Muslim populated Poonthura area and showered abuses on defence minister Nirmala Sitaraman and BJP candidate Kummanam Rajasekharan while they were returning from a road show on the night of April 15. But both leaders greeted them with folded hands. BJP workers ignored the provocation of the CPM goons. Apparently CPM and Congress train their guns against those candidates who are highly likely to win as per the survey reports.
ShareTweetSendShareShare