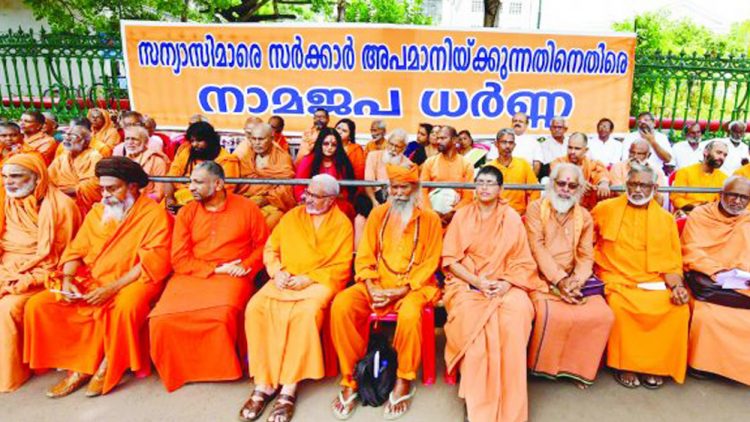 Hindu spiritual leaders staged a namajapa dharna in front of the secretariat in Thiruvananthapuram on April 21 to protest against CPI(M) for insulting Swami Chidanand Puri, head of the Adwaitashramam in Kolathoor, Kozhikode.

Swami Adhyatmananda Saraswathi, Acharya of the Kerala Sambod Foundation, inaugurated the dharna. The Swami said that Hindus cannot tolerate the abuses showered on Puri who leads the Hindu renaissance activities in the state.

It is devilish and demonic to attempt to grab the power for five years at any cost and stoop so low for it. Hindus will not tolerate this sort of employing people to insult the spiritual leaders. These insults against spiritual leaders should be fought and it will be fought.

Swami Adhyatmananda said the Kerala government misunderstood that Hindu movement against its actions to demolish Hindu faith and Hindu institutions would die after some time. But when the protests picked up government trained its gun on Chidanand Puri.

The Swami is the mouthpiece of Hindus; the government cannot silence Swami. Adhyatmananda added that hereafter there should not be a government who breaches the Hindus’ faith and tradition. Those who abuse Chidanand Puri are abusing their own fathers.

Abuse against Swamiji was kicked off by local CPM leaders in Kozhikode. They went to the extent to abusing even Swamiji’s father. Then CPM’s state secretary told that Chidanand Puri is not a sanyasi, but a saffron-clad RSS man. Immediately his leader and CM of the state Pinarayi Vijayan echoed it.

The CPI(M) attack on Swami Chidanand Puri is the latest attempt to insult the Hindu community in connection with Sabarimala issue. The matter is very much significant since Swami Chidananda Puri is the tallest and most revered Hindu spiritual leader in the state. He is the most pro-active Hindu monk in the state who draws mass attendance wherever he addresses spiritual conclaves.