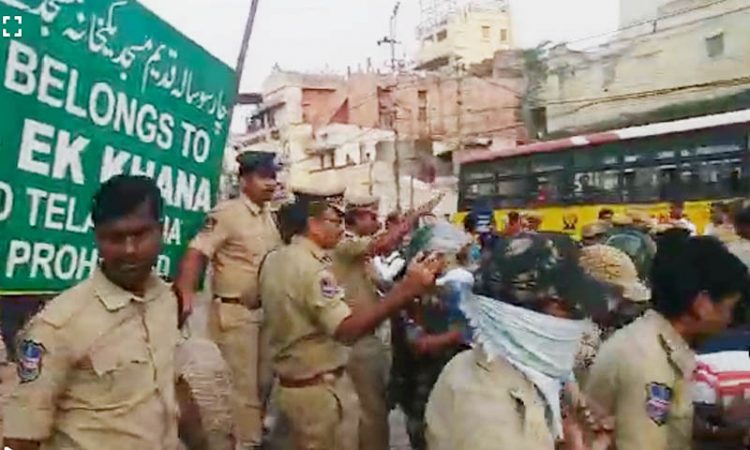 The brute power and machismo that the so-called “minority Muslim community” has come to acquire in today’s ‘secular’ India was once again on display in Hyderabad where the Muslim groups community are crying ‘persecution’ on the ‘illegal’ destruction of a mosque even while the ‘Minorities’ party’ MIM of Owaisi continues to be in alliance with the ruling TRS Party and continues to have a complete stranglehold on the city of Hyderabad and the government of KCR.

See the facts of the case and decide for yourself…

In its efforts to widen the roads across the city, the GHMC (Greater Hyderabad Municipal Corporation) acquired property in the Amberpet area of Hyderabad city after paying a compensation of around 6 crores to the property owner Mr. Maqbool.

The property, thus legally acquired, was demolished. Some passersby after looking at the debris felt that ‘it looked like a mosque’ and informed the political leaders -and all hell broke lose!!

They started claiming it to be a “Waqf property” and have also started ‘reconstructing’ the mosque at the site!

In this melee of ‘peaceful’ protests some eight people, including 4 policemen got injured.

A BJP MLA who visited the site to take stock of situation was arrested and the MIM MLAs who started the trouble remain scot free.

The best part of all this is the statement of the Director, Town Planning K Srinivas Rao who categorically states that the acquired land was a patta land on which the owner had been paying property tax since 1955 and that the land was acquired only after due process of law!!

So what gives the right to MIM to reclaim land?

Now, even if we assume that the land actually belongs to the mosque and not to Mr. Maqbool who is said to have been paying property tax since 1955, what gives the MIM party the right to ‘reclaim’ the land and even start reconstruction of the mosque?

Does MIM or the Minority community at large not need to follow a due process of law to protect their rights and reclaim the property? Or are they above any law in this State/Country?

Why Does religious encroachment take place?

And what indeed are the state government and its entire law enforcement machinery doing in all this while the legally acquired property of the state is so brazenly being encroached upon?

The answer to this can be had on looking at what the government of Telangana did in another such incident. The govt of Telangana a few years back asked the then Commissioner of Police to apologize to the so-called minority Community for reporting the construction of “illegal mosques” in the city.

The message seems to be” How dare the Commissioner acquired guts to report construction of mosques, even if they were illegal and even if they were reported only in response to the complaints received from other residents of the area.”