Massive protest at India Gate – Protesters question double standards of the liberals when the victim is a Hindu. 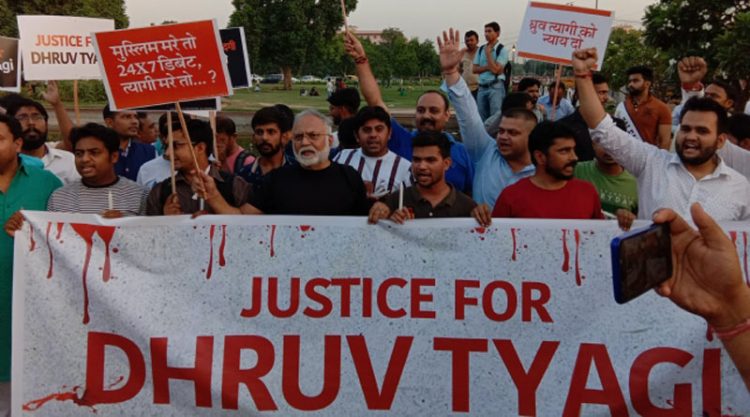 Common people of Delhi came together to demand justice for the brutal murder of Dhruv Tyagi by a Muslim mob. Tyagi was murdered on May 12th when he countered the Muslim youth who were harrassing his daughter while passing through a colony. Hundreds were present at the protest venue demanded that the murderers and all those who supported them should be arrested and given capital punishment. The protestors also vented their ire against the AAP government which seemed to be less interested in pursuing the case as the perpetrators belonged to the Muslim community.

Dhruv Tyagi was returning from a hospital with his daughter when Mohammad Alam and his brothers passed lewd comments on his daughter. When he countered them, they came close and tried to molest his daughter. Sensing danger he left the venue and went home and dropped his daughter. He came back to the location to complain the behavior of his sons to Mohammad’s father Jahangir Khan. Instead of castigating his son, Jahangir Khan along with his son Mohammad and a dozen others assaulted Tyagi. His son Anmol who came to the rescue of his father was also thrashed. Dhruv Tyagi was beaten so badly by the Muslim mob led by the father and son that he lost his life soon after he was admitted to the hospital. Anmol Tyagi is still in critical condition. One of the protestors Prashant said questioned the double standards of the liberal brigade and media. “Wide coverage is given when a Muslims is killed and articles are written in prominent dailes. Dhruv Tyagi was murdered by a Muslim and he is a Hindu victim and hence no coverage for his murder. Even those who wrote about the murder, avoided mentioning the names of the murderers. They were termed as accused and were not held guilty as they do when a Muslim is the victim. But due to social media, Tyagi murder and the double standards of the mainstream media was exposed and people came to know the truth of the matter and the identity of the murderers. This is not the first time that this is happening. This was the attitude of the liberals even when Dr. Narang and Saxena were lynched and murdered by Muslims”, says Prashant.

When questioned on the reason for coming together for a protest, Prashant says, “Along with our demand for justice for Dhruv Tyagi, we also wish to highlight the issue of increase in cases where Hindu girls are being eve teased by Muslim youth in areas where their population has increased. This is happening at several places in Delhi. Robbery and Looting have also increased in the adjoining areas. We wish that mainstream media discusses this issue too and without double standards.” Speaking on the silence of Delhi CM Arvind Kejriwal on the murder of Dhruv Tyagi, the protestor said that it was expected as the victim was not a Muslim. When media asked him for a response, Kejriwal had said that he is busy in Punjab campaigning and will comment later. The same Kejriwal is quick to comment and fix the perpetrators if the victim was a Muslim like he did in the case of Dadri or Palwal, says the protestor.

Another protestor said that he was here to demand justice for Dhruv Tyagi and also demand that such a punishment should be given that it sets an example and no one thinks of harrassing Hindu girls and use their religion as a safeguard.

A candle light march was also held at the venue. Placards demanding justice and questioning the double standards of the liberal brigade were common at the venue.