Congress ousts its leader from the party for saying that Narendra Modi followed values of Mahatma Gandhi. 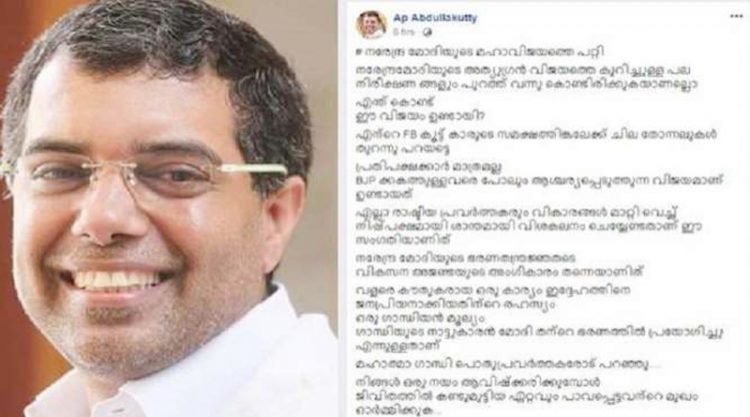 Former Congress MLA and the party’s Muslim face in Northern Kerala, AP Abdullakutty was expelled from the party for praising Prime Minister Narendra Modi. Abdullakutty, who started his political career as an SFI leader, was ousted from CPM in 2009 for hailing Narendra Modi’s Gujarat model development. Later, he joined the Congress and served two consecutive terms as MLA.

In a Facebook post last week, A P Abdullakutty had said Prime Minister Modi got a spectacular victory for the second time because he inculcated Gandhian values in governance.
“This victory is a reward for good governance and development agenda of the Modi government. What made him so popular was that he inculcated enough Gandhian values in governance,” he said citing the Swacchh Bharat mission and Ujjwala Yojana. “Gandhiji once told his followers when you create a policy, think the face of the poorest person you may have met in your life. Modi has done exactly that. Through ‘Swacchh Bharat’ he gave toilets to 9.26 crore families and gave free LPG connections to six crore families,” he said in the post.
Senior Congress leaders in Kerala had come out against Abdullakutty and demanded stringent disciplinary action against him. Congress mouthpiece ‘Veekshanam’ also wrote an editorial against Abdullakutty. The Kerala Pradesh Congress Committee had issued a show cause notice to Abdullakkutty on June 1, seeking an explanation for his controversial Facebook post that has put the party in a fix amid humiliating defeat in the recently concluded Lok Sabha Elections.
Replying to this, Abdullakutty said he did not praise Narendra Modi but his vision of development. He also ridiculed the Congress leadership and refused to apologise.
“We had asked for his explanation. But he stood on his statement and replied in a laughable manner. The statement was bound to affect the party’s stature and discipline and could not be tolerated,” Congress Kerala president Mullappally Ramachandran said in the statement.
“What did I do wrong? Time will prove I’m right,”  Abdullakutty told reporters.
ShareTweetSendShareShare