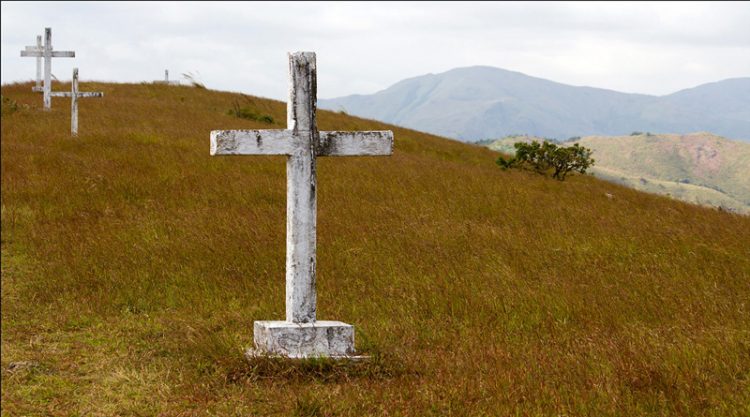 The chief minister’s office made an intervention to stop the recovery of the land encroached by the church after ‘planting’ crosses in Panchalimedu, a part of the sacred forest of Lord Ayyappa. Chief minister Vijayan’s intervention came as the deadline, issued by the revenue department officials, for removing the illegal crosses ends today.

The village officer had directed the St Mary’s Catholic Church, Kanayankavayal to remove all the 14 crosses installed on revenue land which was previously owned by a temple.

However, the District collector has now instructed the revenue officials to slow down the recovery of the land as it is an issue of ‘faith’. The revenue department also wants to maintain the status quo!

Travancore Devaswom Board president A Padmakumar said that the board owned 269 acres at Panchalimedu, which they lost over a period of time.

“The Bhuvaneshwari Devi temple at Panchalimedu is the original location (Moolakshetram) of Valliyangattu temple. Only remnants of the temple are left at the place. We had 269 acres at Panchalimedu which we lost over a period of time. I had submitted a memorandum to the Chief Minister to initiate steps to recover the land. There are some issues at the place. But the board and the government had been making arrangements for Sabarimala pilgrims to view Makaravilakku from Panchalimedu every year. We have plans to retrieve the land and restore the temple,” he told to the New Indian Express.

Meanwhile, the Kerala police have registered a case against a Hindu group that installed a trident (Trishul) in front of an illegal cross atop the Panchalimedu hills, protesting against the Church’s attempts to invade the land.

MP Vinodh, Idukki RDO said that apart from the crosses installed by the church on the government land, a temple dedicated to Bhuvaneshwari was also built near to it on the same revenue land. “A demolition notice will be served on the temple authorities soon,” he said.

In fact, the entire revenue land originally belonged to the temple but later lost over a period of time.

Panchalimedu, a sacred place for local Hindus named after Panchali/Draupadi, is believed to be a place inhabited by Pandavas during the 12 years of exile. Panchalimedu is also an important camping spot for pilgrims during Makaravilakku, a major festival related to the Sabarimala temple. On Makar Sankranti day, tens of thousands of Ayyappa devotees camp here to witness Makaravilakku.