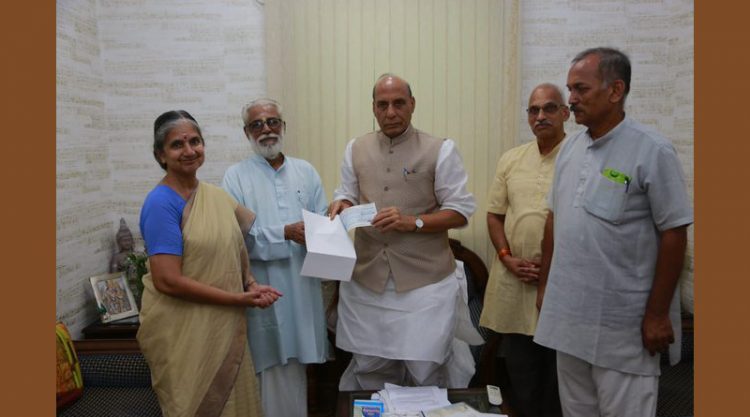 Vivekananda Kendra, Kanyakumari was conferred with the Gandhi Peace Prize of 2015 earlier this year. A sum of Rs. One crore accompanied the prize which was given to the Kendra for its contribution towards promotion of self-help, sustainability, and development throughout our country, especially in areas populated by tribal communities. The Vivekananda Kendra founded in 1972 is centered around the noble thought inspired by Swami Vivekananda which service to man is the worship of God and is guided by the national ideals renunciation as service.

True to its ideals, the Vivekananda Kendra has now handed over the Gandhi Peace Prize money to the Defence Minister Rajnath Singh. The Kendra has described its decision as a humble offering of the organisation towards the Jawans of our great motherland. The money will be used for the welfare of the families of our martyrs.

Vivekananda Kendra has been working in the field of formal and non-formal education through its schools in several regions of Arunachal Pradesh, Assam, Nagaland, and Andaman. There are 75 such Vivekanand Kendra Vidyalayas running now. In the informal education sector, the Kendra has started 120 Anandalaya in Assam’s tea garden areas and this has influenced the life in a tea garden to a great extent. Today Kendra runs some 277 Anandalaya and over 200 balwadis. Besides 565 sanskar vargas for 17000 students, 147 swadhyaya varg for 2500 college students are also being conducted. The Kendra is concentrating on rural development projects in South Tamil Nadu, Maharashtra, Odisha, Assam and Arunachal Pradesh catering to the needs of children, youth and elderly persons.

Vivekananda Kendra was founded by Eknath Ranade. After the successful installation of Vivekananda Rock Memorial at Kanyakumari, he decided to create an army of dedicated youth who would work for the emancipation of people from the neglected, exploited, deprived sections of the society. The Kendra has set up 830 activity centers in the country to launch organizational and service projects.

Gandhi Peace Prize for Social, Economic and Political transformation through Non-violence was instituted in the year 1995. The Award comprises an amount of Rs. One Crore and a Citation. The Jury of the Gandhi Peace Prize is a high-level committee headed by the Prime Minister of India.

This annual award is given to individuals, associations, institutions or organizations who have worked selflessly for peace, non-violence, and amelioration of human sufferings particularly of the less-privileged section of society contributing towards social justice and harmony. The Award is open to all persons regardless of nationality, race, language, caste, creed or gender.