Restoring the glory of Vedas is needed for the welfare of the entire world – Dr. Mohan Bhagwat 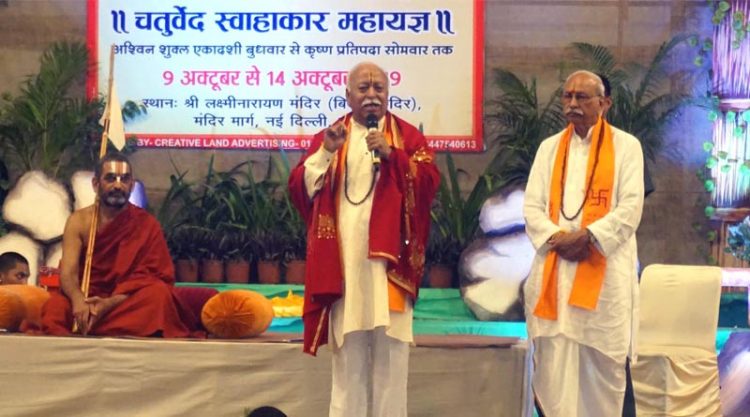 New Delhi : RSS Sarsanghchalak Dr. Mohan Bhagwat said that the daily lives of every person of Bharat are connected to the Vedas. One has to know and understand the Vedas. What we call science knows the outward things but Vedas have science in them and knowledge too along with that which is not perceived by our intellect. The knowledge of the Vedas seeks our inner self. The Vedas elevate the society, and the society is elevated by Dharma and the root of this Dharma is Vedas. Spirituality cannot be opposed to science, as spirituality encompasses experience along with science. Both science and spirituality have been contemplated upon in Bharat since the beginning. Vedas contain both these and hence they are very significant. The reflections on the creation related to the three primordial qualities are contained in the Vedas. These views were expressed by Dr. Mohan Bhagwat, who was invited by the Vishwa Hindu Parishad and Ashok Singhal Foundation as the executant of the Yagya on the third day of the six-day Chaturveda Swahakaar Mahayagya event organised at the Lakshmi Narayan Temple (Birla Temple) in New Delhi.

Sarsanghchalak told that knowledge of the inner self is required to balance the materialistic knowledge that we have gained in today’s world and the lack of this self-knowledge is the cause of strife across the world and is also the reason for the destruction and loss of environment. The Vedas which will provide us with the complete knowledge of the self has to be revived with our hard work and diligence. The revival of the Vedas is not just a question for Hindus alone but that of the entire human race. It is not something that is limited to the matter of rituals or worship. Restoring the glory of Vedas will ensure the welfare of the entire world and for this to happen we all have to dedicate ourselves to the cause.

Trustee of the Ashok Singhal Foundation which has organized the Mahayagya, Mahesh Bhagchandaka said on the occasion that it was the last wish of respected Shri Ashok Singhal ji that the Vedas should reach every household in the country. He hoped that people should learn and assimilate the Vedas for world peace. In order to make the younger generation aware of the Vedas, he wished that a world-class Swahakaar Mahayagya comprising all the four Vedas be organised in Delhi. Though the Mahayagaya was planned in 2015 when he was alive, he had become unresponsive four days prior. Hence, the Mahayagya had to be postponed. Now after four years, we have organised this Mahayagya in which all the four Vedas are being recited by 60 Acharyas under the guidance of Ramanujacharya Chinjaya Swamiji from Southern Bharat. This Mahayagya started on the 9th of October and will end on the 14th morning with ‘Poornahuti’. Each and every person from all sections of the society irrespective of their being in political, social or religious sectors, have been invited in person. The event has also been promoted on social media so that more and more youth take part in this Mahayagya. One lakh people who are connected with us through social media are watching this Yagya today.

All the saints are arriving and people from across the globe are also joining here. All the guests who will witness this Mahayagya will then go to their respective places and organize a similar event there.

During the earlier session, Shri Dinesh Chandra, member of VHP Governing Council, informed that there are separate Yagya Kundas for each Veda and over the last three days Veda mantras from each of the four Vedas are being chanted in a perfect way and after each mantra is recited, the offering is made to the Yagya Kunda dedicated to that particular Veda. It is due to this the event is called the ‘Chaturveda Swahakaar Mahayagya’, he said. This is the third day of this Mahayagya and on the 14th of October, between half-past eleven and twelve, there will be a ‘Poornahuti’ of the Mahayajya. It was indeed special that today Tridandi Swami Ramanujacharyaji spoke about the Vedas and narrated as to how our Rishis experienced the almighty and attained self-realization. Swamiji also recounted the experiences of those who attained self-realization and said that there are many even today who are learning and memorizing the Vedas and have undergone the same experience as those Rishis who attained self-realization then, he said. He informed that Pujya Ashok Singhalji had resolved that the Vedas should come back into our society and the knowledge of Vedas should reach the common man and all misconceptions spread about Vedas during the era of Colonial rule have to be removed.

In the evening session, Pujya Sant Rupendranath from Haridwar and Sudhanshu Ji Maharaj from Delhi took part in the Mahayagya. Dr. Subramanian Swamy, VHP Working President Alok Kumar were present as the executants of the Yagya on the occasion.