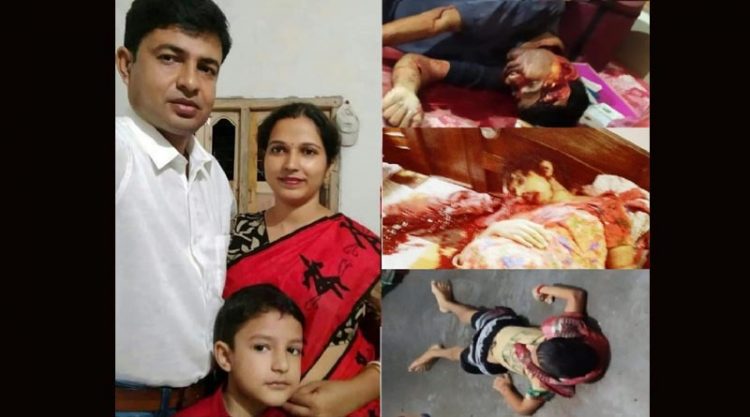 West Bengal : In a gruesome incident the entire family of an RSS Swayamsevak, including his young son of 8 years, have been brutally hacked to death at their home in Murshidabad in West Bengal on the Vijayadashami day i.e. 08th October. Bandhu Prakash Pal (35), his wife Beauty Mandal Pal (30) and their son Bandhu Angan Pal are the victims of the gory murder that has shocked the nation. Beauty Pal was pregnant with their second child. Bandhu Prakash was a teacher at the Sahapur Primary School.

As it seems that Mamata Banerjee is losing control of the law & order situation in West Bengal, the triple murder has yet again proved that anti-nationals and Islamists are a law unto themselves in West Bengal. The murder was committed with a sharp weapon and the police have recovered the same from the location. Though the local police say they are unsure of the reason for the murder, local residents believe that it is the handy work of Islamists who wanted to drive away all the Hindus in the area and an RSS Swayamsevak was their ideal target to instill fear among the Hindus here.

Bandhu Prakash was living in Labutla in Jiaganj area of Murshidabad along with his wife and son for almost five years. On the Vijayadashami day, Prakash returned from the market at around ten in the morning as per eyewitnesses. At around eleven-thirty, loud screams were heard from his house. Soon the neighbors came running as a young man was seen running out of the house. What they saw inside has shocked many beyond belief. Their throats were slit and left bleeding and it seemed to be a handiwork of an expert. The bodies have been sent for postmortem and forensic experts have collected samples from the scene.

Bandhu Prakash’s Facebook profile shows that he was a proud Hindu and a devotee of Durga Mata. His timeline is full of videos of various Durga Puja Pandals in the town and his selfies. There are hardly few Hindus in this Muslim dominated area as most have relocated to other areas over the years. Many believe that Bandhu Prakash’s association with the RSS as the reason for the murder. Local residents who are shocked have demanded a CBI investigation into the murders and nab the culprits soon.