Swayamsevaks are running more than 1.5 lakh service projects across the country – Bhaiyyaji Joshi 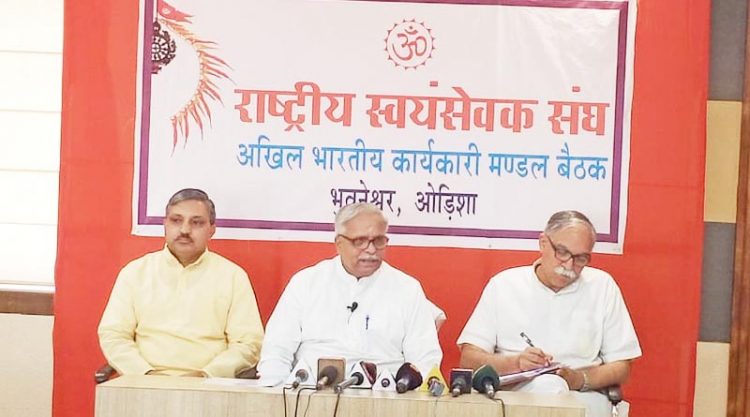 Bhubaneswar, October 18. The Rashtriya Swyamsevak Sangh’s swayamsevaks are running more than 1.50 lakh projects across the country. They are also running 20 large charitable hospitals and 15 blood banks.

Addressing a press conference on the last day of the Akhil Bharatiya Karyakari Mandal meet, Sh. Bhaiyyaji Joshi, Sarkaryavah, RSS said, that while RSS had already been working for disaster relief, but from 1989 onwards, Sangh started service projects in a planned manner. At present, the Swayamsevaks are running more than 1.5 lakh projects.

The 20 large charitable hospitals and Fifteen blood banks are run by swayamsevaks.

He said that the swayamsevaks are also working for people with special needs. Due to their efforts, around 3 to 4 thousand eye donations happen every year. The swayamsevaks are also working in the field of rural development. With their efforts and support from the local residents, 250 villages have been developed as a role model. He said our vision of village development is based on the tenet that the village residents should themselves do their work, we would only support them. The RSS’ swayamsevaks have included five areas in the scope of rural development – Education, Health, Agriculture, Social environment, Self-reliance.

He said that there are more than one lakh villages where people understand and accept Sangh’s thoughts and support RSS.

Around 5 lakh swayamsevaks  who are 16-17 years old attend daily shakha. Around 4 lakh swayamsevaks who are less than 17 years old also attend the daily shakha. Out of 59000 rural mandals, the RSS work exists in 30000 Mandals. Replying to questions related to NRC, Sh. Bhaiyyaji Joshi said that the NRC should be implemented across the nation. He said that it is the responsibility of any government to identify the infiltrators and take proper action after formulating a policy. So far this experiment has been carried out in Assam, now it should be implemented across the nation.

Replying to a question regarding the construction of Ram Temple in Ayodhya, he said, our view is that all the hurdles in the way of constructing a Ram Temple at Ayodhya should be removed. Now the hearing has been completed in the Court and we are hoping that the Court’s verdict would be in favour of Hindus.

When asked about the efforts to settle this matter out of court, he said, these efforts were made to resolve this issue amicably. Had this happened, this would have enhanced Bharat’s reputation across the world. We had welcomed these efforts. But this couldn’t happen and the matter went on for very long in the Courts. Now the Court’s proceedings are over, all of us should wait for the verdict.

Replying to a question on implementation of the Uniform Civil Code, he said, this has been an old demand. This should have been done at the time of the framing of the Constitution. This will be beneficial for everyone and in any nation, there should be one law for all of its citizens.

Regarding the return of Kashmiri Pandits, he said that the Kashmiri Pandits had to leave their houses because of security reasons. We want there should be a secure environment in Kashmir so that Kashmiri Hindus can go back to their homes.