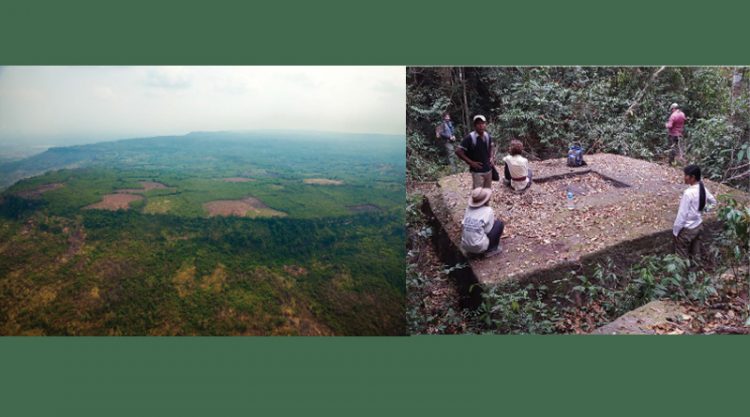 Ancient stone inscriptions tell tales of a city called Mahendraparvata. The once-mighty metropolis was one of the first capitals of the Khmer empire, which ruled in Southeast Asia between the ninth and 15th centuries. It was long believed that the ancient city was hidden beneath thick vegetation on a Cambodian mountain, not far from the temple of Angkor Wat

Now, thanks to an incredibly detailed map, researchers can “definitively” say that the ruins, overgrown by thick vegetation on the mountain of Phnom Kulen, are in fact from that 1,000-year-old city. The ancient city was never really lost, as Cambodians have been making religious pilgrimages to the site for hundreds of years.

“It’s always been suspected that the city of Mahendraparvata that’s talked about in the inscriptions was indeed somewhere up here in the mountains,” said study co-author Damian Evans, a research fellow with the French School of the Far East (EFEO) in Paris. Now, “we can say for sure: Definitely, this is the place.”

In a collaboration between the EFEO, the Archeology and Development Foundation in the U.K., and the APSARA National Authority (a government agency responsible for protecting the Angkor region in Cambodia), researchers combined airborne laser scanning with ground surveys and excavations to weave a narrative of the development and demise of this ancient city.

The technology, known as light detection and ranging, or lidar, creates maps of an area by having a plane shoot lasers at the ground and measure how much light is reflected back. From that information, researchers can figure out the distance from the lasers on the plane to solid objects between the vegetation on the ground. (For instance, a temple would measure as a shorter distance to the airborne laser than a road would.)

Evans’ team combined lidar data it had gathered in 2012 and 2015 with digitized survey and excavation data gathered earlier. The researchers also combined this data with the nearly 600 newly documented features that archeologists found on the ground. Those features included a ceramic material, as well as bricks and sandstone pedestals that typically indicate temple sites.

One of the most remarkable revelations was that this city was nicely aligned in a massive grid that stretches across tens of square kilometers, Evans told Live Science. A city is a place “that someone sat down and planned and elaborated on a massive scale on top of this mountain,” he said. It “is not something that we necessarily would expect from this period.”

Mahendraparvata dates back to around the late eighth to the early ninth century, which is centuries before archeologists thought such organized cities emerged in the Angkor area. At that time, urban development was typically “organic,” without much state-level control or central planning, he said.

What’s more, the city-dwellers used a unique and intricate water-management system. “Instead of building this reservoir with urban walls, as they did for famous reservoirs at Angkor, they tried to carve this one out of the natural bedrock,” Evans said. These ancient inhabitants carved an enormous basin out of stone but left it half-complete for unknown reasons.

The ambitious project’s unseen scale and layout provide “a kind of prototype for projects of infrastructural development and water management that would later become very typical of the Khmer empire and Angkor in particular,” Evans said.

Surprisingly, there’s no evidence that this massive cistern was connected to an irrigation system. That likely means one of two things: The city was left incomplete before the residents could figure out how to provide water for agriculture, or the lack of irrigation is one reason the city was never finished.

Mahendraparvata is “not located at an especially advantageous place for rice agriculture,” which could explain why the city wasn’t the capital for long, Evans said. Rice was the dominant agricultural crop of the greater Angkor region at the time. The city, from which King Jayavarman II supposedly declared himself the king of all the Khmer kings, was a capital only between the late eighth to early ninth centuries, according to inscriptions found.

Though most archaeologists don’t attribute great historical accuracy to these inscriptions, this particular story matches the dating and lidar data from the study, Evans said.

“Now, having a very complete picture of the whole, greater Angkor area and a finalized map of the whole thing, we can start to do some pretty sophisticated modeling of things like population and growth over time,” Evans said.

He said he hopes that future research will tease apart what happened to this ancient city between its birth when it was bustling with new ideas, and its demise when it disappeared among the dense leaves.

The study’s findings were published on Oct. 15 in the journal Antiquity.