“SC verdict in line with the sentiments of whole nation; Should not be seen as a victory or loss for anyone”, RSS Sarasanghachalak Dr.Mohan Bhagwat 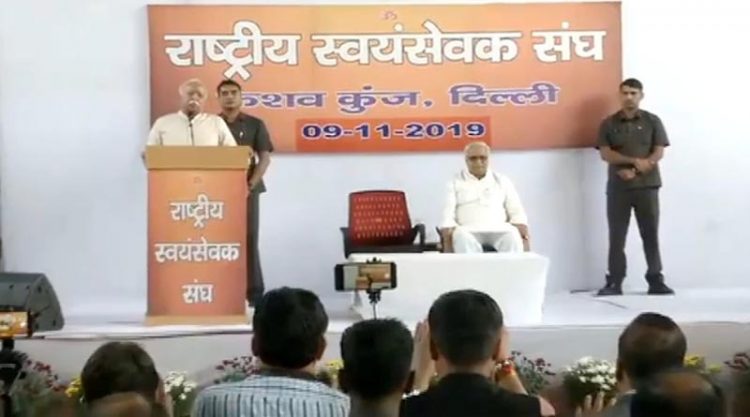 ShareTweetSendTelegram
RSS Sarasanghachalak Dr.Mohan Bhagwat addressed the press in New Delhi post the verdict of the SC on the Ram Janmabhoomi. He said that the verdict is a just decision in line with the sentiments of the whole nation that has honored the beliefs, faith, and devotion of the people of this nation. He stressed that the verdict should not be seen as a win or loss for anyone.
Mohan Ji Bhagwat said that the case went on for a long time and the final verdict has come out now after a long legal process. During this process, the arguments and evidence presented from all the sides have been heard and deliberated upon. We wholeheartedly thank and congratulate all those legal luminaries who were part of this legal process from all the sides and presented their cases. We also remember the sacrifices and contributions of the brave Karyakartas who dedicated their efforts and laid down their life for the purpose over all these years.
We also welcome the efforts of the governments, community leaders, security personnel in maintaining the law & order and ensure that peace and bonhomie is preserved. People of Bharat who waited for the verdict with equanimity should also be congratulated.
The verdict should not be seen in terms of victory or loss. The verdict that has been arrived at after due deliberations of the facts and evidences presented, is to be seen as one that will unite the entire society and foster bonhomie. We urge everyone to express their happiness and reactions to the verdict in a restrained and Satvik way.
We hope that the government will take whatever steps are required for the construction of the temple and bring the issue to its conclusion as per the guidelines mentioned in the SC verdict.
Sarasanghachalak’s press briefing was followed by a question and answer session where he answered questions related to Ram Mandir construction and the role of government.
Tags: RSS#sarsangachalak#Ayodya verdict
ShareTweetSendShareShare