Supreme Court honors review petitions filed against its judgment on Sabarimala; Refers them to a larger bench for review 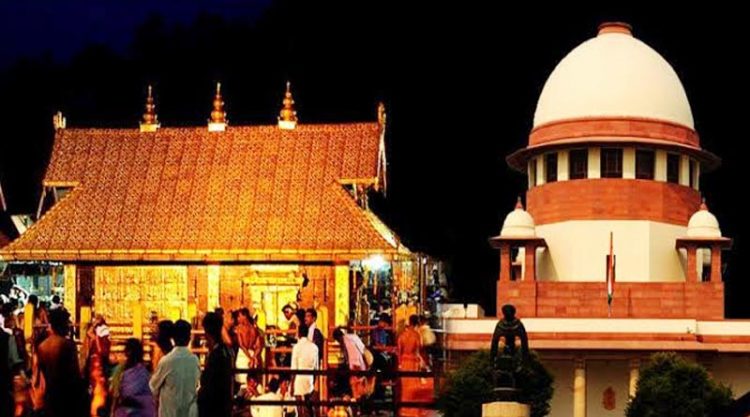 ShareTweetSendTelegram
The Supreme Court delivered its verdict on the much-awaited review petitions over its Sabarimala judgment last year. Honoring the petitions the 5-judge bench has referred the petition to a larger bench. The New Bench will comprise of 7 judges of the Supreme Court.
The Sabarimala case was referred to the 7 member bench of the Supreme Court by a 3-2 verdict. The Supreme Court had reserved orders on review petitions in Sabarimala’s case after giving a full-day hearing to the petitioners on February 6. The Constitution Bench of CJI Gogoi, and Justices Khanwilkar, Nariman, Chandrachud and Indu Malhotra heard the arguments in a bunch of petition filed by the Travancore Devaswom Board, Pandalam Royal Family, and groups of devotees against the September 28, 2018 judgment, which declared right of women of all age groups to enter the temple.
The majority of CJI Ranjan Gogoi, Justice Khanwilkar and Indu Malhotra expressed that the issue of whether the Court can interfere in essential practices of religion needed examination by a larger bench. But Justices Chandrachud and Nariman dissented. CJI Gogoi mentioned that issues such as the legality of Female Genital Mutilation in the Dawoodi Bohra community, Muslim women mosque entry, right of Parsi women who married outside the community to access towers of silence, etc, have been referred to a larger bench. However, it’s earlier verdict to allow women of all ages to pray in Sabarimala stays. The 7 member Supreme Court Bench would look into this issue.
Petitions against 2018 SC judgment
The petitioners against the September 2018 order argued that the practice at Sabarimala temple was based on the celibate character of the deity. The petitioners also submitted that constitutional morality was subjective, which should not be applied in matters of faith. Religious beliefs cannot be tested on the basis of rationality. The right to worship has to be exercised in consonance with the nature of deity and the essential practice of the temple.
They also submitted that the judgment erroneously imported the concept of “untouchability” under Article 17 to the situation of Sabarimala temple, without understanding its historical context.
ShareTweetSendShareShare