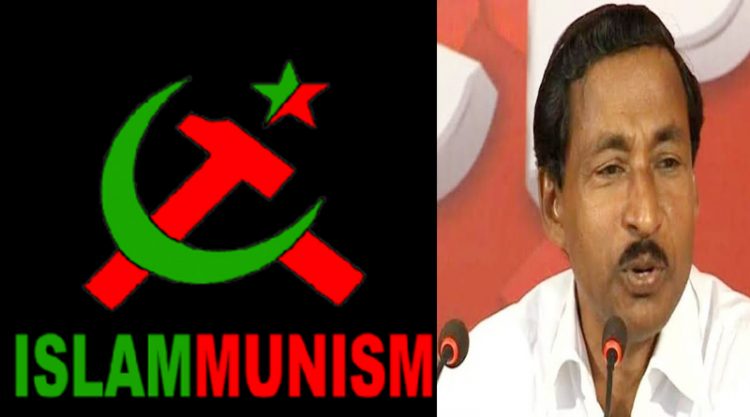 ShareTweetSendTelegram
“Muslim terrorist outfits in Kozhikode are helping the Maoists. Islamic terrorists are promoting them. The police must probe into it,” said CPM district secretary P Mohanan. He was speaking at the meeting of the Kerala State Karshaka Thozhilali Union (KSKTU) in Thamarasseri.
Confirming the nexus between Islamic and Communist terrorists, he said that the promoters of Maoists are the Islamic terrorists. He said that the Islamic extremist outfits and Maoists are cronies and Islamic outfits like NDF (presently PFI-SDPI) extend wholehearted support to the Maoists. The Popular Front of India, Jamaat-e-Islami and Muslim League have registered their strong protests against his statement. A Muslim League leader said that the terminology ‘Islamic terrorism’ itself was wrong.
Two CPM workers were arrested for suspected Maoist links and charged under UAPA. As per latest reports, the accused confessed to the police that they are Urban Maoists. Since the CPM led LDF Government came to power in the state, seven Communist terrorists were killed in the state in various encounters. Even though the state unit of CPM has changed its stand over Left-wing terrorism, taking stringent measures to curb the insurgency in the state, its central leadership continues to support the left terrorism. Earlier this year, the CPM had condemned the legal actions taken against the Urban Maoists in the Bhima Koregaon case and demanded an immediate end to such “blatantly threatening postures” towards voices of dissent and democracy!
Welcoming the statement of the CPM leader, the BJP leader Shri Kummanam Rajasekharan has demanded a probe into his allegations. BJP leader Shri K Surendran also demanded an investigation into the startling revelation of P Mohanan. Mohanan is an accused in the murder case of CPM rebel TP Chandrasekharan.
ShareTweetSendShareShare