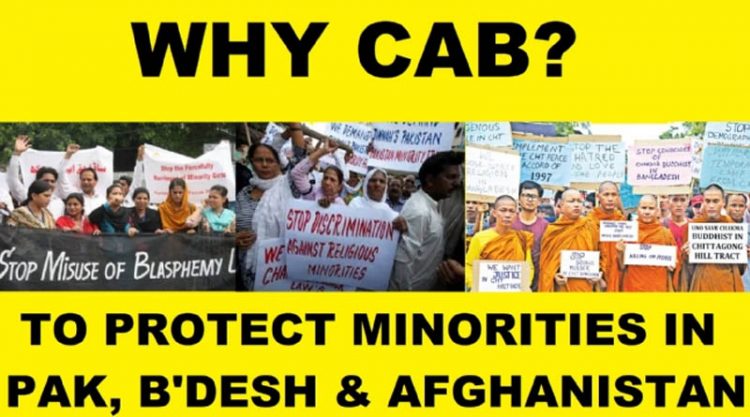 ShareTweetSendTelegram
The Citizenship (Amendment) Bill 2019  The amendment aims to provide Indian citizen rights to the persecuted minorities belonging to the Hindu, Sikh, Buddhist, Christian, Jain and Parsi communities from the neighboring countries of Afghanistan, Pakistan, and Bangladesh. While those in support of the amendments opine that it is a much-required amendment to safeguard the lives of minorities in these Islamic countries, those who are opposed to it say that it is ‘communal’ as it excludes the Muslims. The facts available show that the minorities in these 3 countries have been persecuted by the Muslims and the Islamic establishment in an organised manner, a fact which the Congress, Left and self-proclaimed liberals willfully neglect.
Hindus, Sikhs, Buddhists, Christians, Jains and Parsis in Afghanistan, Pakistan and Bangladesh despite being a minority after partition in 1947, have their population decreased to minuscule proportions. The Nehru-Liaquat pact had promised rights to minorities and safeguard their lives but the Hindu population in Pakistan fell from 22% in 1951 to 7-8% in 2018. 40 Lakh Hindus relocated to India between 1951 and 1970 even after the Nehru-Liaquat pact due to rampant atrocities on them in Pakistan. Christians too have been a target to Islamic fundamentalists in Pakistan. Buddhists have been killed and persecuted in Afghanistan by the Taliban and other entities.
Witnessing the travails of Hindus in Pakistan Mahatma Gandhi had openly declared in a prayer meeting on September 26, 1947, that the Hindus and Sikhs in Pakistan can come to India by all means if they do not wish to continue to live there. In that case, it is the first duty of the Indian government to give them jobs and make their lives comfortable. But the Congress party which swears by Gandhi is now opposed to the CAB which is ironic.
Why CAB is important for the Hindus?

The Hindus have been the most persecuted community in Pakistan and Bangladesh. While the Hindus in Afghanistan were already minuscule before the turn of the 20th century, the horror of Islamic fundamentalism continued to hit them even during the freedom movement and later in Pakistan and Bangladesh.
In 1951 while the population of Hindus reduced drastically from 22% to a mere 8.5% in Bangladesh, the population of Muslims there has risen from 76% to 91% between 1951 and 2018. Even in India, the population of Hindus has decreased from 85% to 79% whereas that of Muslims has increased from 9.8% to 15.2% during the same period. The need to protect Hindu lives does not need any more reasons.
Is CAB against Assam accord?
The Opposition led by Congress and TMC is trying to misguide the nation by saying that the CAB is against Assam Accord. But the truth is that Pakistan and Bangladesh have always tried to make Assam a Muslim Dominated State. Infiltration from Bangladesh is not unknown to the country and the aid Pakistan gives to foment Islamic fundamentalism in Bangladesh is also too well know.
Pakistan has claimed that parts of Assam and North-East should be part of an Islamic nation as they had a sizable population of Muslims. Zulfikar Ali Bhutto in his book ‘Myths of Independence’ wrote, “It would be wrong to think that Kashmir is the only dispute that divides India and Pakistan, though undoubtedly the most significant. One at least is nearly as important as the Kashmir dispute, that of Assam and some districts of India adjacent to East Pakistan. To these Pakistan has very good claims.”
Failure to get Assam included in East Pakistan in 1947 remained a source of perpetual resentment among Pakistanis. It continues to aid and abet Islamic radicals in Bangladesh and Assam to create unrest in society.
Atrocities on Minorities in Pakistan, Bangladesh, and Afghanistan

Minorities especially Hindus have been targeted to murder, rape, kidnapping and forceful conversion both in Pakistan and Bangladesh. Hindus are Pakistan’s largest minority, and around 80% live in Sindh province. They face land-grabbing, attacks, and kidnapping. Forced conversions, temple desecration, rape, and murder are also reported regularly. Christians are the second major minority community across the country, and about 80% live in Punjab province. They are the poorest section of society and often falsely accused of blasphemy against Islam and face constant violence. During just the first two weeks of 2016, five attacks on churches and Christians were reported by the media.
Pakistan‘s minority communities face danger not only from militants and terrorists, but often from their fellow citizens, who consider them inferior. The genesis of this attitude lies in the state’s philosophy, which is based on one particular religion: Islam. Since the birth of the country, the state has been directly and indirectly promoting an ideology which makes minorities second-class citizens in their own land.
The ill-treatment of minorities is two-fold: biased legislation and social intolerance. These two forms of discrimination do not operate in isolation; rather, they work together and are mutually reinforcing the law also contributes to these discriminatory practices. Though the constitution of Pakistan guarantees equal rights for every citizen under Article 25, the same document prohibits non-Muslims from becoming president or prime minister. The same standard applies to other high positions within the government.
In 2014, Pakistan Muslim League (Nawaz) lawmaker Ramesh Kumar Wankwani had told the Pakistani National Assembly that around 5,000 Hindus migrate from Pakistan to India and other countries every year due to religious persecution. Population of Hindus in Pakistan keeps dwindling as they migrate to avoid persecution. Hindu exodus in India especially from Pakistan is a regular phenomenon but the UPA Government never paid any respect to their cause. This is despite the promise made by Jinnah himself. Hindu temples and properties are attacked over allegations of blasphemy or disrespecting Islam. Most of them are false and are mostly to target Hindus. Recently a Hindu teacher was accused of Blasphemy and properties of Hindus in Sindh province were destroyed by Muslim mobs.
In Bangladesh too, Hindus are targets of vandalism, murder, illegal occupation and rapes. Hindu temples are vandalized and idols broken over charges of blasphemy. Shops and establishments of Hindus are targeted by Muslim mobs over smallest of altercations. Between 1978 and 1980 Hindus and Buddhists in Bangladesh had to face genocidal situation. Just in 2013 more than 15 Hindu temples were vandalized or set ablaze in different parts of Bangladesh. In December 2016, 15 temples were vandalized and houses of Hindus were looted by armed Muslim gangs after a small fight.
Lives of Hindus, Sikhs and Buddhists in Afghanistan is no different. Though the non-Muslim minorities constitute less than one percent of the population, most of them too seek refuge elsewhere due to religious persecution. During the rule of the Taliban, Hindus were forced to wear identity labels. Before the Russian invasion of Afghanistan, Hindu and Sikh leaders estimated their combined population at more than 100,000 nationwide. In 1992, more than 15,000 Hindu families fled to neighboring India, leaving only about 3,000 Hindu and Sikh families in Kabul. Today, just more than 300 Sikh families remain in the capital.
As late as June 2018, 10 members of Afghanistan’s Sikh minority were killed in a targeted suicide bombing in the eastern city of Jalalabad. From around 50,000 in the early 1990′ s there are fewer than 2,000 Hindus and Sikhs in cities like Ghazni, Jalalabad and Kandahar. In Kabul there are about 520 Sikhs and Hindus, in 40 Sikh and 10 Hindu families. Those remaining and wish to relocate, India remains there last hope.
Prominent Indian leaders who vowed to protect minorities in Pakistan

MAHATMA GANDHI
“Those who had felt driven from Pakistan should know that they were the citizens of the whole of India….. They must realise that they were born to serve India and add to her glory.” (Prayer meeting on 12 July, 1947)
PATTABHI SITARAMAYYA
“That trail of conflict and suffering continues and produces crisis again and again. The present is essentially a problem of protecting minorities in East and West Bengal.” (Issued by him as President of Congress, 27 February, 1950)
J.B. KRIPLANI, Extract of last speech as Congress President
“We must then relax central and provincial regulations, if any, about service and settlement in particular arrears of the Indian Union for those coming from Pakistan.” (AICC, New Delhi, 15 November, 1947)
JAWAHARLAL NEHRU
“I feel that it would be desirable to have a central relief fund which can be used for any type of emergency relief of distress but which must now be especially used for the relief and rehabilitation of refugees from Pakistan who have come to India.” (National Herald, 25 January, 1948)

ABUL KALAM AZAD
“The Education Ministry has been trying to absorb most of the refugees’ teachers from Pakistan areas, who were in Government service and who now migrated to Delhi.” (Letter sent to Sardar Patel on 9 February, 1948)
DR. SYAMA PRASAD MOOKERJEE, As former Minister in first Interim Cabinet of India
“Let me say at once the Bengal problem is not a provincial one. It raises issues of an all-India character and on its proper solution will depend the peace and prosperity, both economic and political, of the entire nation.” (On his resignation as Minister of Industry and Supply, 19 April, 1950)
H. N. MUKERJEE, Communist Party of India
“Things are going to be done against Hindus in Pakistan……Those who are coming and those who have come here before are called refugees. They are not refugees. They have to have a home to be provided…… This is a country which should be home for them.” (Lok Sabha, 12 February, 1964)
TRIDIB KUMAR CHAUDHURI, Seven times Member of Parliament, (Lok Sabha), Revolutionary Socialist Party
“It know of several cases where even visas were not allowed to Hindus having Pakistan passports So that they can come here. Perhaps, there was the fear in the mind of the Government that they might surrender the passports and remain here. These things must stop. I must state very categorically on behalf of the Bengali people that these things have got to be stopped. You must allow all people to come here who want to come away–this is ·the immediate short-range problem. You must allow them to come here whether they have got valid migration certificate or not because you have not made arrangements whereby everybody who wants to come away can get the migration certificate. The people who cross the border and take shelter in India must be given refugee certificates or migration certificates whatever it is. For God’s sake, you allow them to come away and live here.” (Lok Sabha, 12 February, 1964)