Jihadi violence in West Bengal, Jamia Millia Islamia unleash a reign of terror under the guise of protest against Citizenship Act after Friday prayers 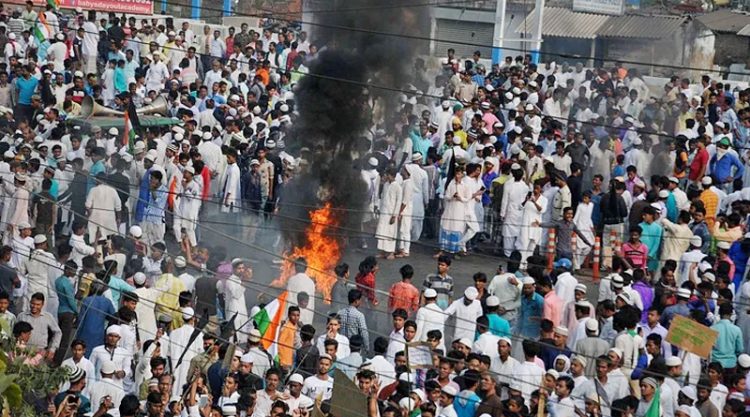 ShareTweetSendTelegram
Various radical Islamic outfits and Urban Naxal groups staged protests in the national capital and West Bengal against the historic Citizenship Amendment Act, which seeks to give Indian citizenship to the members of persecuted minorities from neighboring Islamic countries. The protests took a violent turn in West Bengal and New Delhi on Friday as communally charged Islamists took to streets, turning the protests into massive riots under the guise of protesting against the Act.
According to sources, more than 16 various Islamic outfits participated in the protests after Friday namaz. The protests were planned in a meeting of various Muslim organisations called on Wednesday. The protests have marred the law and order situation in West Bengal and brought various parts of the state to a standstill as the police force, at the behest of the Mamata Government turned mute spectators to the Jihadi violence.
A railway station complex in West Bengal’s Murshidabad district was set on fire on Friday evening by thousands of people, especially belonging to the Muslim community. The protesters vandalised the Beldanga railway station and brutally manhandled personnel of the Railway Police Force at the station complex.
The violent Muslim mobs pelted stones on ambulances and attacked several vehicles on the National Highways. Several cops were reportedly injured in the protests.
The Muslim masses also resorted to violence in Howrah district and blocked tracks at the Uluberia railway station. There are reports that engine drivers were attacked at various stations and train services were suspended in certain areas including the Sealdah division of the Eastern Railway.
In Kolkata, protesters took to the streets and disrupted traffic for hours at Park Circus in the name of protesting against the Citizenship Amendment Act. Thousands of people from the Muslim community also blocked the National Highway 6 in the area. In the East Midnapore district, Muslim protesters and TMC goons attacked BJP General Secretary Sayantan Basu’s car.
On Friday, the national capital also witnessed violent protests as a group of hooligans of Jamia Milia Islamia University affiliated to various radical Islamist-Leftist outfits resorted to stone-pelting under the guise of protesting against the new Citizenship Act.
The radical Islamists unleashed massive violence on the police in New Delhi. At least three Delhi police personnel were injured in the Jihadi violence. The police resorted to lathi-charge and detained 50 students of Jamia Milia Islamia.
Tags: #Jihad voilance#west bengal
ShareTweetSendShareShare